In my last blog I wrote about a recent article, dated October 28, 2012 in the Phoenix Republic. Mrs. Daley from Camp Verde wrote about her favorite place to visit in Southern Arizona. The place she referred to was the John Slaughter Ranch Museum just east of Douglas about 15 miles and is what is left of the 65,000 acre Slaughter Ranch. This ranch is located in the extreme southeast section of Arizona on the border of Mexico and within about 5 miles of the New Mexico border.  To get to the ranch you have to drive to Douglas, Arizona and take 15th Street east. This turns into a dirt road called Geronimo Trail, named after the Apache warrior who fought the US Army until his surrender in 1886. The Geronimo Trail leads to a white gate with a big Z over it. The Z was Slaughters cattle brand. 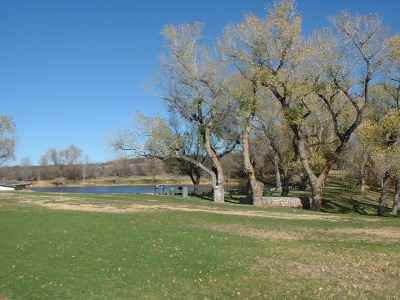 View from the ranch house looking toward the mesa that is the high point on the property.

it contained. In 1773, Captain Juan Bautista de Anza came to the area and the Spanish established the San Bernardino garrison around 1775.  The ranch originated from a Spanish Land Grant that was purchased by Ignacio Perez in 1822. After 10 years, Perez quit using the land because of the Apache raids. Slaughter purchased the ranch in 1884 from the Perez heirs. With the Gadsden Purchase, the ranch lands were divided with one third in the US and two thirds in Mexico. After Slaughter’s death, the property was later sold and what is left in the US is now a National Historical Landmark. 130 acres of the original property was purchased by The Johnson Historical Museum of the Southwest, The US Fish and Wildlife Service owns the rest of the property in Arizona, now known as the San Bernardino Wildlife Refuge. 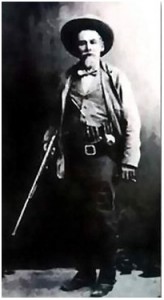 Slaughter was born in Louisiana in 1841 and died on his ranch in 1922. During his life he fought in the Civil War, was a cattleman, Indian fighter, lawman and gambler. He served with the Texas Rangers and was elected Cochise County Sherriff in 1886 and served until 1890. He helped rid Cochise County of outlaws after the Shoot Out at the OK Corral. There are many stories that you can read about John Slaughters life at the Ranch Museum. John Slaughter is one of the people that tamed the Old West and brought law and order to the Arizona Territory.

The Museum has many different things on display. The buildings were restored in the 1980s and furnished with items from the era. There may be some items that can be traced back to Slaughter but most are not. The property contains an icehouse, wash house, main buildings, granary, commissary and a garage that houses a vintage car. On the mesa above the ranch are the remains of a US Cavalry camp.  The inside of the main house is open to visitors from 10 until 3. The property also has a spring fed pond and the ranch site is located at the head waters of the Yaqui River. During the droughts that affected the west in the 1900s, the cattle herds survived because of the water on the property. The small amount of acreage is all that is left of the only remaining great Arizona 19th century cattle ranch.

The pond has wildlife visit during the day. When Angie and I were there we saw deer and large swans. At first 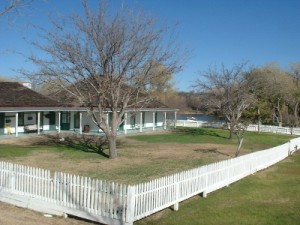 I thought that they were props since they didn’t move. Finally they got bored looking at me and went about eating again. This is a pleasant spot to bring a picnic lunch after you have taken the loop trail into the refuge.  It is about a 2 ½ mile loop and has many birds in the area. You can even make a short visit to the Gadsden Hotel in Douglas and roam around the mezzanine and view the stained glass. If you have enough time in your day and the Sand Hill Cranes are wintering in Arizona, you can head north to Whitewater Draw and take in the birds in this area also. Both places can be seen during the same trip.

The Museum is about 1 ½ hours and Whitewater Draw is about an hour away from Down By The River B and B, the lodging hub of Cochise County. The San Pedro River bnb is a great location to visit all of Cochise County’s many attractions.

This entry was posted 10 years ago on Friday, November 9th, 2012. and is filed under Events and Things To Do.