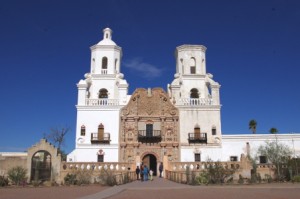 Down By The River B&B is centrally  located for various day trips to places throughout SE AZ. The San Pedro River B and B Lodging is perfect for loop trips to see this part of Southern Arizona. One all day loop trip we like to make is driving to Tucson and then taking Interstate 19 south with a stop at San Xavier Mission, then on to Tubac. Leaving Tubac head south to Nogales with a possible stop at Tumacocori Mission State Park on the way. At Nogales take Highway 82 east to Patagonia and finally stop at Sonoita and Elgin to do a little wine tasting. From here we take 82 east as we head on home. This loop trip can be done in reverse or it can be a detour on the way to or returning from our southeastern Arizona BnB.There are even some alternates that can be used to shorten the loop.

There are people that have never heard of the San Xavier del Bac Mission, or White Dove of the Desert as it is also called. Some people have stopped and some others may have seen it in the distance as they traveled on Interstate 19. I first saw in the 1970s when I came to Arizona. Barb was there during the restoration and saw the work that was being done. So I am going to tell you a little about this landmark when you make this loop trip. Each year 200,000 people from all over the world stop to view the finest example of Spanish Colonial architecture in the United States. 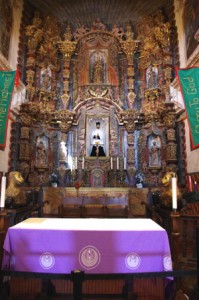 The history of the mission started in 1692. Father Eusebio Kino, a Jesuit missionary, established the San Xavier Mission just south of present day Tucson at the Tohono O’odham Village of Wa:k. That is spelled correctly. The church was named after the patron saint San Francisco Xavier, pronounced ”Havier”, “del” is Spanish for of the, and the word “Bac” comes from the way Father Kino wrote down the word Wa;k.  Visits by missionaries to the village were sporadic until finally in 1752 the first church building construction was started under the tutelage of Father Espinosa. This church still stands adjacent to the east side bell tower. The building now houses the museum and gift shop. The actual construction of the large church began in 1783 and was completed in 1797 under the Franciscan missionary Father Velderrain. Father Velderrain accomplished this with the help of the village population and monetary loan of a wealthy rancher in the State of Sonora in present day Mexico.

The mission has been under many jurisdictions since it was established. Originally, this part of Arizona was under the authority of New Spain. When the Mexican people gained independence in 1821, San Xavier became part of Mexico. 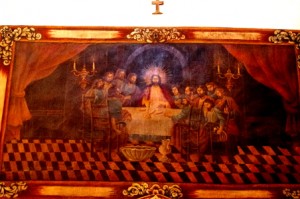 With the Gadsden Purchase of 1854, the Mission joined the United States as part of the New Mexico Territory. The territory was later split and San Xavier became part of the Arizona Territory and then in 1912 the territory became a state. As to the Catholic Churches jurisdiction; San Xavier was in the Diocese of Durango when the mission was first established. It changed to be a part of the Diocese of Santa Fe when it was established in 1859. In 1866 Tucson became a diocese and regular services were again held at the Mission. A school was started at the Mission in 1872 by Franciscan nuns. In 1963, The Mission was listed as a National Historic Landmark and it has the distinction of being the oldest intact European structure in Arizona.

The original construction was made with low-fire clay brick, stone and lime mortar, the entire structure is 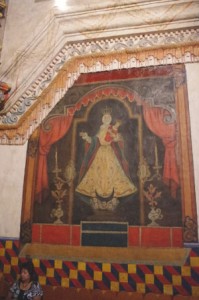 roofed with masonry soaring vaults, which is not found in any other Spanish Colonial buildings within the United States. The artwork and decorations on the interior of the church are from unknown artisans. The belief is that they were from Queretero and were created in guild workshops and then transported to the mission by pack animals. After being placed in the church then local craftsman finished the work using gesso, a gypsum product, and then adding paint. The Franciscan Cord can be found throughout the interior and exterior of the church. There are many mural paintings and statues throughout the mission

Over the years the mission started to deteriorate through normal wear and tear and in 1859 the first repairs were made to the church. In 1887, an estimated 7.6 earthquake in Mexico damaged the mission. This earthquake was about 60 mile south of Douglas, AZ and was felt up to 120 miles away. The quake also changed the flow of the San Pedro River and you can read what the Tombstone paper wrote about the earthquake here.  In 1905  Bishop Granjon began 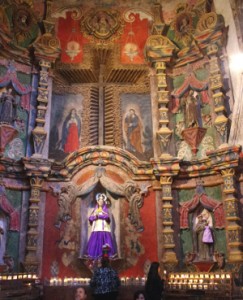 major repairs on the mission and again more restoration was done in 1939 after a lightning strike affected the west tower. Cement was one of the repair materials used during these times. As it turns out this would later cause more damage to the artwork on the interior of the church.

In 1989, excessive leaks were found in the walls and forced emergency restoration. Major conservation began in 1992 with a five year effort to preserve the interior of the building. I remember seeing the building in the late 1970’s. The murals and statues looked worn and drab. This was caused by all the years of candles being burned in the church. Because of the smoke and water damage the work was critical to maintain the artwork. There is an ongoing effort to preserve the church when the money is available. Funding sources have been harder to get due to budgetary restrictions by grant and state organizations. To help with the preservation of the Mission, a group of community leaders formed the Patronanto San Xavier in 1978. You can read about their efforts on their website. 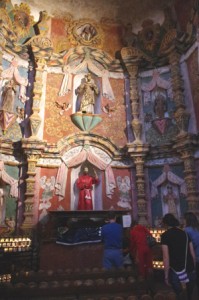 signs to the Mission. Visiting the Mission San Xavier is free of charge. During the year there are special events that are held at the mission.  It is definitely worth your time to take a look at a part of history that help to shape this part of the Southwest. This mission and Tumacocori are the inspirations for us to name one of our guest rooms the Mission Room. 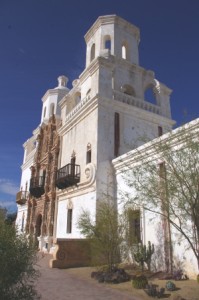 Tags: San Pedro River B and B, San Xavier Mission

This entry was posted 10 years ago on Friday, December 28th, 2012. and is filed under Events and Things To Do.