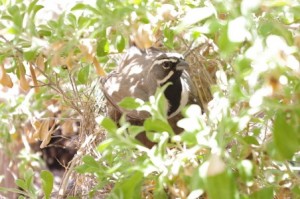 Black-Throated Sparrow will nest in places that make you wonder why they picked that place.

San Pedro River Bird Watching can be frustrating when the elusive birds are hiding in the trees but in other cases it is very easy. The element of luck and preparation is needed to make it easy. Case in point, a Black Throated Sparrow has nested in our breezeway before. I photographed the bird on the nest but didn’t follow up to see what the progression was. She used one of the pieces of wicker furniture we have as her nesting site. Black Throated Sparrows aren’t really scared of us and they will let us walk by without taking off. While watering plants outside, we will find sparrow nests in the lower branches of trees. Why they nest there I haven’t a clue. It is just the right height for a coyote to grab the bird. We did have one instance where we saw and record a sparrow family history. 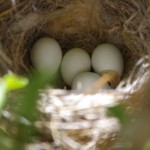 This San Pedro River Bird Watching adventure started on June 9 th while we were watering plants. We have a large pot outside the dining room window that has a Texas Sage planted in it. We really hadn’t been watching for any activity at the sage since all the action that we wanted to see was around the hummingbird feeder. The sage isn’t really thick and a Black Throated Sparrow built a nest in the center of the sage. During the watering of the sage, I spotted the sparrow by accident. She was quiet and didn’t move while I was watering and I really was just interested in finishing up without disturbing the bird as little as I could. We were able to observe the nest from inside the dining area and I decided that I could document what was going on for the next few weeks.

I got my camera and put on my zoom lens so that I could stay back from the nest. I got the picture of the Black Throat on the nest. The next day when I was walking by, I noticed that the sparrow was not in the nest. I had a chance to take a photo of the nest with 4 white eggs. I didn’t want to disturb the bird so I just left as soon as I had my picture. I figured that I would wait and see what happened in 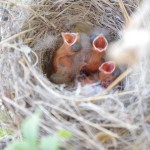 Reflex from rustling the plant set the you to peep for something to eat.

another few days. Checking from the dining room, I would see her on the nest sometimes and gone at other times. On the morning of June 13, after I had come over to the guest side, I was opening up the windows to let in the cool 64 degree air. Yes in Arizona, San Pedro River Bird Watching can be done in the cooler temperatures of our mornings. South of Phoenix doesn’t mean hotter than Phoenix. Of course the elevation of our San Pedro River bird watching B and B helps tremendously.

But back to the story. After opening the window at the dining room, I saw the female return to  the nest and I heard the peeping of the small young. When she took off to find more food, I grabbed my camera and made my way to the nest. Az I rustled the branches to get a little better picture, all 4 heads popped up with mouths wide open. What a picture I thought and what a busy bird that sparrow would be for a while just to keep these 4 fed. The sparrow was always on the move during the next week. 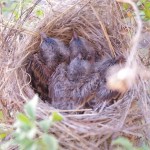 All four sat quiet in the nest after their eyes were opened and they had their feathers.

I would check out the window intermittently so I would know the female was away from the nest. On June 19, I was able to photograph the young birds all quiet in the nest. They no longer were pink skinned but instead they all had feathers on their bodies. On the 21st I was out working in the yard and saw a small bird out on the patio. You could tell that the bird was young and testing his wings. Mom wasn’t too far away. I hurried back to the house to retrieve my camera again. I was able to get a slightly blurred picture of the mom and the youngster as he chased her wanting to be fed.  I was able to get a good picture of the young bird sitting on a planting pot. He watched me but I kept back so that I could see what he would do. I asked myself, what about the other 3? I went back to the nest and two of the 3 birds were still there. I didn’t see the third bird and have no idea of that birds fate. The two in the nest were looking around like they wanted to leave but were a little too scared to take off. I got the picture of the 2 and then left to go inside. 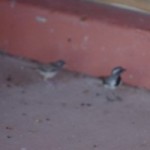 The young bird followed mom all over asking for food.

On the 23rd, I checked the nest out and all the birds were gone. It was interesting to watch the of the Black Throated Sparrow family and the activities. One can only marvel at life when you see a small egg turn into a bird with the special ability to fly. Now with a little luck you might also find something of interest when you are San Pedro River Bird Watching. So when you decide to do some San Pedro River Bird Watching, think about where you will stay and check out Down By The River B and B, the Lodging Hub of Cochise County. We are centrally located to all Cochise County activities and birding areas. 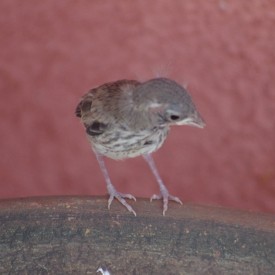 The first Black-Throated young to leave the nest

After about 3 weeks the nest was empty and all the birds were gone.

This entry was posted 9 years ago on Saturday, June 29th, 2013. and is filed under Nature. 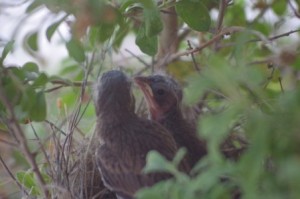 Two Black-Throated Sparrows still in the nest but ready to fly.