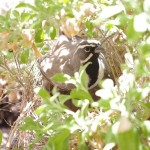 Black-Throated Sparrow will nest in places that make you wonder why they picked that place.

There are many chances to see San Pedro River nesting birds during the spring months. We have had bird nest all over the property at Down By The River B and B. Hummingbirds have nested in the carport. House Finches have been in the trees next to the house. Black – Throated Sparrows have been in baskets in the breezeway and a Virden has been in the cactus next to the house. 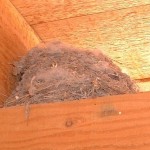 The Say’s Phoebe has been nesting on the porch beam for six summers.

But the most persistent bird has been a Say’s Phoebe that has built and maintained a nest for 6 Springs now. She has built the nest in the patio beams at the dining room windows of Down By The River B and B. It has been a lot of fun to watch her do the repairs to the nest prior to laying the eggs. She has had to rebuild the nest once because of a heavy monsoon storm that blew the nest off the beam.

The Phoebe starts the nest by bringing in mud to anchor the materials to the beam. She then brings in straw, twigs and string that she finds in the area. Soon the nest is built up almost 3 inches allowing a little space between the next and the roof of the patio. This year many of the birders that visited were able to listen to the chicks peep for the male and female to return with food. The adults were constantly on the move to find insects to feed the three young.

The last fledgling remained in the nest while the other two and the female were flying around.

Finally two were out of the nest and flying short distances. They stayed together but followed the female. She would fly to a tree and call them. They would call back and finally fly to the tree. The third one was still weak and you could tell that it didn’t want to venture far from the nest. The next day all three were out flying but we believe that the weaker one was finally caught by a Roadrunner.  I came out to see the Roadrunner leaving the yard and the female Phoebe buzzing it and making a lot of racket. 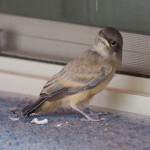 One of the young was perched on the sill when I was out with the camera.

We tracked the Phoebe’s for days and finally they weren’t around anymore. Occasionally we see the female back around the nest but we have only glimpsed one bird we think might be one of the younger ones. We have had a lot of our birding guests watch the San Pedro River nesting birds during their stay. The Say’s Phoebe and the activity at the nest are just an example.

The female did finally come back to the nest by herself. She has been flying around catching insects on the wing. This is her territory and she has laid claim to it. 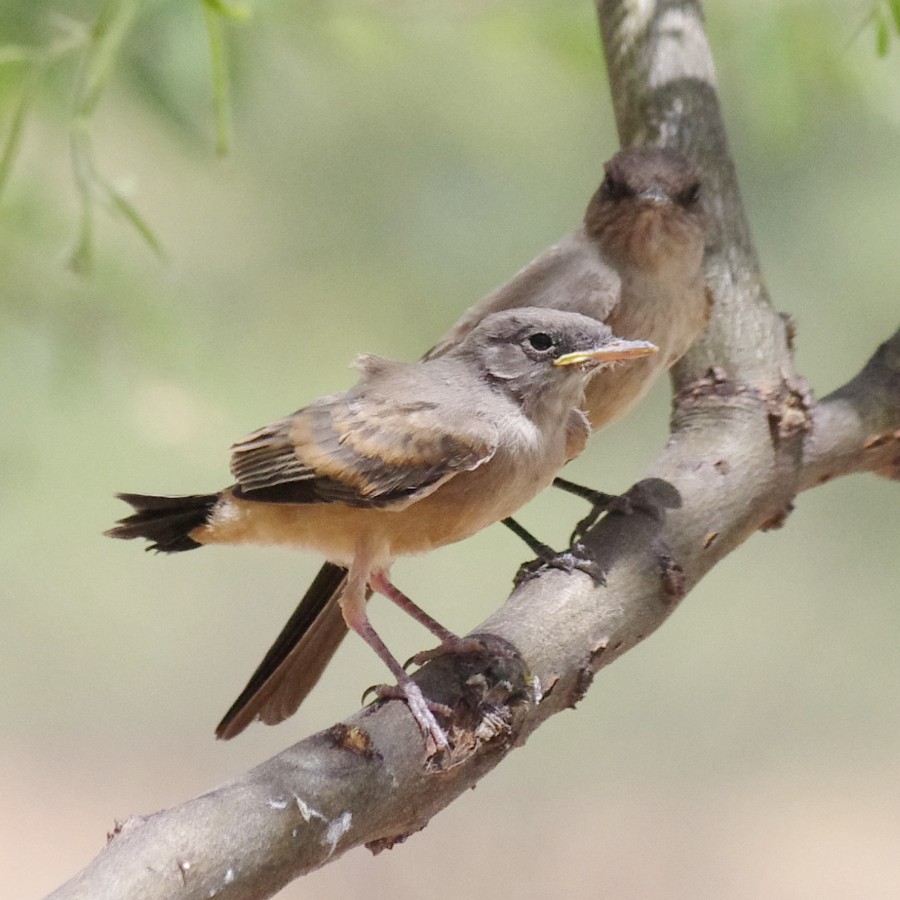 The female would move to a tree and then call her young to get them to fly to where she was.