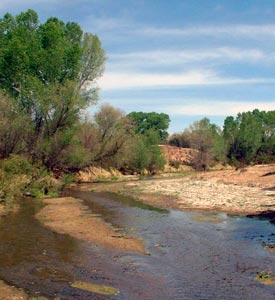 The San Pedro River is home to the Southeastern Arizona Gray Hawk.

The Southeastern Arizona Gray Hawk can be found along the San Pedro River during the spring and summer months. In the US, the Gray Hawk is a migratory raptor found in Southeastern Arizona, the Rio Grande Valley in New Mexico (scarce in that location) and is a year around resident in extreme southern part of coastal Texas. The Gray Hawk can be found in Coastal Mexico down into Yucatan and into Central and South America as far south as Northern Argentina. Click here to see the map.

However, if you don’t want to travel out of the country, you can come to Southeastern Arizona to view Gray Hawks and stay at a world class b and b within walking distance to the San Pedro River. After we started the b and b, we discovered the Gray Hawks could be seen along this part of the San Pedro River. My first encounter occurred when we drove to the San Pedro and rounded the corner. We saw a hawk which quickly took off to parts unknown. We weren’t really sure what we saw and had no time to take a picture. We knew that it was a smaller hawk and thought we could identify it. 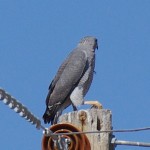 The Gray Hawk didn’t notice us at first.

After reviewing our Sibley’s, we narrowed it down to the Gray Hawk. After we read up on the habits of the bird in this area we found out that it was a migratory bird that nests and raises young along the San Pedro. Over the years we wandered along the San Pedro and saw Gray Hawks many times. I either didn’t have the camera or I could never get my camera up and focused before the bird was gone. I wanted to have something that I could show our guests when they asked if the Gray Hawk was in the area. It was frustrating for me not to have a photo of this hawk while I had many other photos of other hawks. Lady Luck was not with me many times. 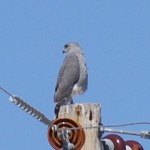 Recently, we were headed into town and I decided to grab my camera as we left. I really didn’t expect to see anything but you never know. When we came around the corner onto Escalante I saw a bigger bird on a pole. I knew it was a hawk. We stopped and I shot a quick picture through the windshield. The windshield was rather dirty but at least I would have the picture so I could figure out which bird we were seeing.  We moved up a little closer.  I opened the car door and slowly got out. The hawk stayed on the pole and I got my zoom lens focused on the bird. I had 4 shots before the hawk took off.

After we got home, I downloaded the pictures onto the computer. When I enlarged the photos I was glad to see a Southern Arizona Gray Hawk.  Lady Luck finally allowed me to get my photo after almost 10 years of trying. And to think I almost didn’t bring the camera on that short trip. Now my quest is for a picture of the Mississippi Kite that is in the area. 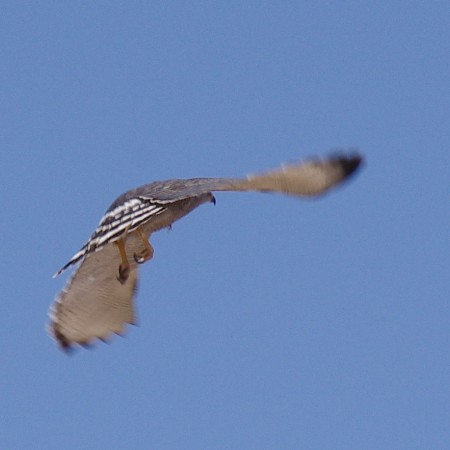 After my fourth shot the Gray Hawk took wing and left us behind.

This entry was posted 8 years ago on Saturday, June 7th, 2014. and is filed under Down By The River FAQ, Nature.