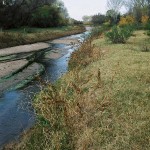 The Greater Roadrunner is in the Cuckoo family. This bird is a fascinating to watch and is rather canny as it hunts.  Unlike the Loony Tunes character that is chased by the coyote but always outsmarts him, the resemblance stops there. The Roadrunner doesn’t eat bird seed but instead it hunts its prey including lizards, other birds and snakes. Roadrunners have been known to kill rattlesnakes. We have seen a roadrunner carrying snakes and lizards through the breezeway at the b and b.

Since Cochise County is a Birding Hotspot, there are many young birds around that the Roadrunner will 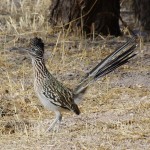 go after. Gambrels Quail on high on the list. We have quail on the property and we leave the brush for cover so that the Quail have a place to hide and raise their young. When we first opened I had a symbiotic experience with a Roadrunner. When I walked on the property, a Roadrunner would follow me and wait for me to scare a lizard or snake out of the brush. He would stay about 4 feet away but just close enough to be able to make a quick dash for dinner.

Generally the Roadrunners are solitary but we did have a group of five together in the yard one day. We don’t know why they were together unless it was a mother and juveniles that were learning to hunt. We have also had one Roadrunner roost in strange locations around the b and b. The Roadrunner would roost on window sills against the window of a room. On other occasions a roadrunner would roost on the mantle of an outdoor fireplace and on a wood 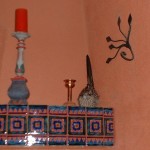 The Roadrunner roosting at Down By The River a Cochise County Birding Hotspot.

decorative piece that was 9 feet off the floor. When we spotted the Roadrunner in those locations we wondered how he got there. Very seldom do you see a Roadrunner leave the ground in flight.

It took us a while but we finally saw the bird run leap and fly up to the roost at dusk and settle in for the night. So when you want to visit a Cochise County hotspot and see Roadrunners, plan your trip to Down By The River and see what we have to offer. Our bird list will give you a idea of what you can see during the year around our property. Additionally we are centrally located and therefore you only need to do short day trips to all the Cochise County hotspots. 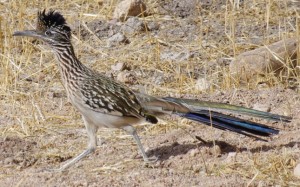 The Greater Roadrunner sometime follows me to see what I scare up for dinner while I am walking through the brush.

This entry was posted 8 years ago on Tuesday, July 1st, 2014. and is filed under Down By The River FAQ, Nature.