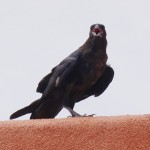 The Common Raven have a distinctive call and when close it is unnerving.

The Common Raven and the Chihuahuan Ravens are large black birds with distinctive calls and if you are concentrating on one thing, such as finding a snake, that call can startle you if it is close. Both of these birds can be seen at Down By The River B and B. The Common Raven is a little larger than the Chihuahuan Raven and the bill is longer and more curved. I haven’t been able to photograph either raven while here at the b and b. 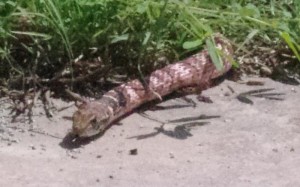 The Coachwhip Snake, sometimes known as a Red Racer, hunts for small rodents, lizards and other reptiles.

I had to water the plants and trees because the monsoon rains were not cooperating and failed to fall at the b and b. That morning, I was almost finished and was finally watering around the patio. Just the day before I had walked by a Coachwhip Snake and didn’t see him until he quickly moved away. The snake’s camouflage is good. It is similar in color to the flagstone deck we have in the back patio.  It shocked me that a snake could be that close to me and I hadn’t seen it. I went in and got the camera. He had disappeared by the time I returned but I later spotted the snake as he reemerged. I was able to take some photos and then watched as he went into a planter on the patio. 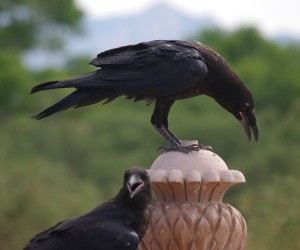 The Common Ravens usually are found in pairs. They will eat anything that they find.

I was watering one planter and was looking into the rosemary to see if the snake was still in hiding. Having a heightened sense of alertness, I heard this loud call just as I was looking at one area and jumped. “Snakes don’t make that sound fool” I said to myself. I figured that a raven had flown overhead and went back to watering. Then I heard the loud call again. I looked up but there wasn’t a bird in the sky. As I turned around, the Common Raven was sitting on the patio roof not 5 feet from where I stood. No wonder it was so loud.  Since I had the hose in hand I squirted the raven. The bird just spread its wings and enjoyed it. 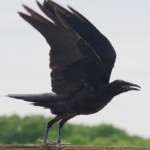 The Common Raven starting to fly off to greener pastures.

Well I haven’t ever had a chance to photograph any raven this close so I put down the hose and went in for the camera. I figured the bird would be gone by the time I got back. But no this raven was not moving and now there was another raven on the roof with the first. I took pictures of them on the roof and had a nice photo shoot. Then they both flew over to the fountain and landed there. So I thought I will just walk over and see how close I can get before they fly off. Amazingly, I was close enough that I could have reached out and touched them. Not a good idea with those bills. I settled for some good close up shots.

Our birding friend Randy always joked that you could tell a Crow from a Common Raven by the length of the nose hairs. Well with the close up, I could see that this bird looks like it does have nose hairs. The birds were really just curious and flew around the back patio looking at things and nosed around (pardon the pun). We do see the ravens around here but usually they are flying or scavenging on the road. These two must have been models because they didn’t mind posing for the photo shoot. After about 10 minutes they flew off and I haven’t seen them back. To quote Poe maybe they told me “Nevermore”. 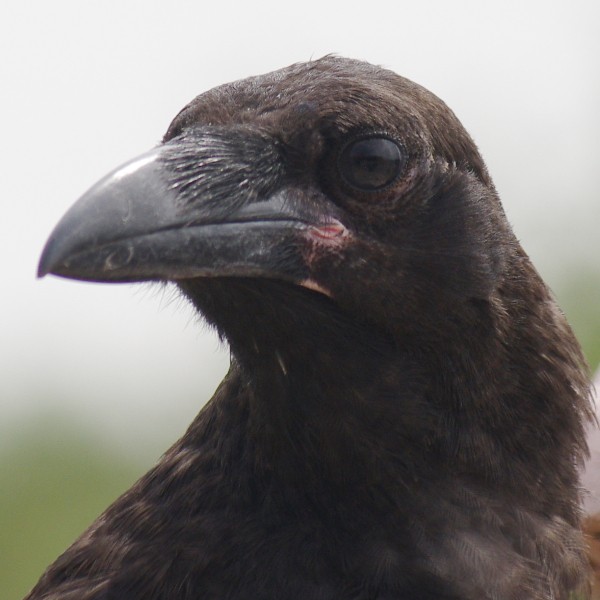 A close up photo taken from about 3 feet definitely show what could be called nose hairs.

This entry was posted 8 years ago on Sunday, August 17th, 2014. and is filed under Nature.