Cochise County Lizards – fun to watch while you sit on the patio. 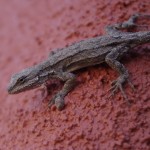 Cochise County lizards start to come out after the weather warms up. You don’t see them in the winter unless you uncover one in the yard when you are moving rocks. Lizards are cold blooded so they need warmth to become active. We do find some lizards inside the house and usually they are easy to catch on the concrete floors. They don’t get much traction so we can reach down and pick them up easily. Sometimes it is just easier to catch them with the broom and the dust pan. 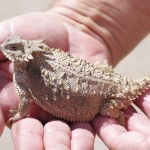 Great grandad in hand is a Regal Horned Lizard

Most of the lizards here in Cochise County are harmless, even though they may have a frightening appearance. The Horned Lizards, also known as Horny Toads have been used in old scifi 1950 films. The Regal Horned Lizard is the largest horned lizard in Arizona and can fill the palm of your hand. They can blend into the rocks and you can walk right by without seeing it. There is one Cochise County lizard that is dangerous but only if you try to pick it up. That is the Gila Monster or Mexican Beaded Lizard. This reptile is protected and bothering one can get you in trouble with the authorities. In the 10 ½ years I have been here, we have only seen one of these lizards on the property. By the time I got the camera it was gone into the brush and we didn’t see it again. 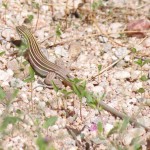 Arizona Striped Whiptail Lizard has an additional stripe down its back 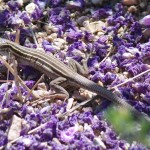 Many lizards look alike but there are subtle differences. We use a link for Arizona Lizards to help us ID Cochise County lizards. The Desert Grassland Whiptail and the Arizona Striped Whiptail look the same until you count the number of strips on the back. Lizards eat insects and ants but I spotted something that was a bit different. One lizard has some bumps on its back and so I took the picture to see what it was. The lizard had 3 riders. I have no idea why they were there but the lizard didn’t seem bothered by them at that location. Lizards also become prey to other animals such as snakes, birds, and mammals. We have seen Roadrunners with lizards and sometimes snakes in their beak running through the breezeway.

3 insects are riding this Desert Grassland Whiptail Lizard just over the back legs.

Cochise County lizards are fun to watch and there are a lot of them around the b and b during the warmer times of the year.