Lightning Strikes During A Monsoon

Southeastern Arizona is noted for the monsoons that occur during July and August. Here at Down By The River B and B there is a lot of monsoon activity and with that rainfall and thunderstorms the lightning strikes can be incredible to watch. Some even hit so close to us that you see the bright flash at the same time that you hear the thunder. You don’t even have time to say anything and your overpowered by the noise of the thunder and the reverberation that happens afterwards.

I recently had a guest here for the second year in a row and he enjoys taking photographs of the storms in this area and other locations in Arizona. While he was here this time he was filming when the lightning struck a tree in the river. 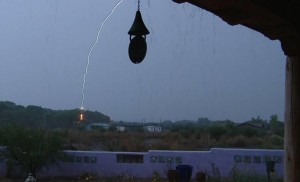 We were all standing around enjoying the rain that was coming down and some of the lightning displays that were going off around the area when the one hit the tree. Just by chance the camera was on and the strike was recorded. Rob was here for 3 days and during that time he spent most of the evenings watching the storms brew and develop. He had a lot of cooperation from Mother Nature putting on the show with the lighting effects, both from the thunderstorms and the sunsets. 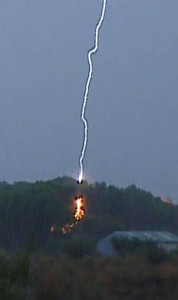 Close Up Of The Strike

If you wish to see more of Rob’s work you can go to his website and look at the other things that he has photographed.  Rob has taken pictures of lightning, weather and landscape photos and they are available to view on his website.

Now next year you may want to consider coming to Down By The River and sitting out on the patio with a camera and relax to watch the free show during the monsoons in southern Arizona.
Oh and if you are worried about the heat remember that this part of Arizona is higher in elevation than the Phoenix area and therefore we aren’t as hot. In fact when the rains come down we can be in the 70s. That makes in nice enough to sit out and have dinner on the patio.

Hope to see you here one day and we can enjoy the fireworks together.
Bill

This entry was posted 13 years ago on Tuesday, August 3rd, 2010. and is filed under Nature.