Many guests have asked us the history of the dining room table that is located at Down By The River B and B. It is a little drama all in itself actually. After Barb and I had decided to open a B and B, she went out shopping for items to put into the place. One thing she wanted was something that stood out and made a statement. Barb didn’t want anything that you could walk into any furniture store and find. It had to be different. One Saturday, as was her normal schedule, she went out scrounging yard sales in Phoenix and the surrounding areas and then off to antique stores and used furniture shops. That weekend in particular she had good luck at finding things but bad luck at grabbing them first. The same holds true with the table. She had seen it sitting amongst other furniture at a used furniture store on 28th St and Bell Road, J and K by name. She went over to the table and thought that this would be perfect. She went in to find help to move the table and better look at it when someone came out and put a sold sign on it. Needless to say when she got home that night, I heard about all the treasures that she was beat out of by other people and that if she had been there 15 minutes earlier she would have gotten what she wanted. About 2 weeks later, I had stopped at a Mexican furniture store that brings items out of Guadalajara, Mexico. I found a table that I thought might work. The next day we had gone to downtown Phoenix for a home tour in one of the historical districts. After the tour we went to the Mexican furniture store and she looked at the table but didn’t like it because it wasn’t decorative enough and it was from pine. 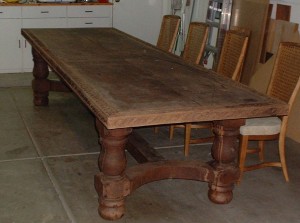 Then Barb said “Let’s go to J and K to see if they have anything else.” So we went and low and behold there is a table there just like she described. I figured that it hadn’t been delivered yet or it was another one like the first. There was no sold sign on it so I figured that it was a twin to the first. Barb said no it was the same table she had looked at before. When I got close to it I noticed the damage from water and splitting. I told her that all this was good for was firewood. There was a big crack in a W shape that was bent up, and several cracks in one of the planks. Barb said no this is what she wanted. Well it was shoved up against other furniture so I wanted to move it out so that I could see all the way around it. I didn’t want to have more surprises on the hidden side of the table. When I tried lifting it I found it too heavy to move, but since there was a lot of stuff on it I figured that it was that load of items that made it so heavy. NOT – I found out later that the table weighed 600 pounds. The table is made out of mesquite and the wood is quite dense, I haven’t seen a mesquite tree in the States that is big enough to take four slabs of wood that were two inch thick by almost six foot long and 2 feet wide. It turned out that Mrs. Alvarez, couldn’t get the table into her house and so it had come back to J and K. Well after that I knew that the table was meant for Barb to have, so we bought it and had it delivered to the garage at our house in Glendale, AZ.

Thanksgiving dinner on it in November. Little did I know that almost every night until November, I would be in the garage in the summer heat working on refinishing the table. I started out thinking that I would just repair the areas and then put the chocolate stain on to match the existing stain. I got some epoxy and some clamps and boards and pressed the W shape back into the table top where it had cracked away. After a couple of days, I released the clamps and the epoxy held. Next came sanding the excess height at the W shape that I couldn’t get down to make it a smooth surface. The wood was so hard that I had to use a belt sander with 50 grit sandpaper to get the surface down flat. After I had done that for a while, some of my sweat dripped onto the table. I looked in dismay and knew that the 1 month project had just grown larger.

What happened was when the moisture hit the table at the sanded area a beautiful reddish wood appeared. I got a wet towel, rubbed it over the area again and saw that the wood looked to nice to be covered up with a chocolate brown stain. Well after almost five months, untold amounts of sandpaper, and a few beers to help with the project I had everything sanded and prepped.

Ready to finish after 4 months of sanding

Luckily my dad was visiting at that time when I was getting ready to finish the table and asked me what I was going to use to finish it. I told him I though I would use spar varnish or polyurethane. He told me no that would blister if something hot got to it and it would also be hard to fix without taking all the finish off again. He suggested Tung Oil and said it resists water and hot things like coffee cups or warm plates won’t bother it. So I used the Tung Oil and it worked like a champ. There are 7 coats of Tung Oil on the table and if I want to hide scratches all I have to do is use a good cleanser on the table to get any dirt, polish or oil off and then add another coat of Tung Oil. 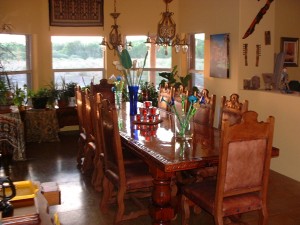 Now the table sits proudly in the dining area waiting for guests to sit down and enjoy the great breakfasts that our guests comment on during their stay. Hope you can experience this first hand one day yourself.

This entry was posted 12 years ago on Wednesday, July 14th, 2010. and is filed under Down By The River FAQ.

8 Responses to “The dining room table” Comments are currently closed.