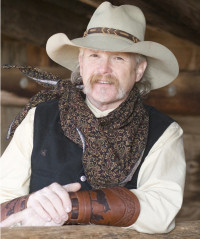 We have had some wonderful and fascinating people who have visited Down By The River B and B. One guest who was recently here was Steve Harrington with his new bride, Annee. Steve hails from the White Mountains here in Arizona.  He is a member of the Mountain Saddle Band along with Steve Taylor and Rusty Weiss. They are members of the Western Music Association and their specialty is cowboy music, which includes ballads and gospel, interspersed with storytelling and cowboy poetry. Cowboy music, often mistaken for country music, is what has been sung by the likes of Rex Allen, Gene Autry, Roy Rogers, and Marty Robbins, to name a few.

After Steve and Annee settled into their room, we met them on the patio. While talking with Steve, we found out that he has a varied and interesting work history. He has worked as a full time cowboy and raised horses. Steve is a Minister and has served as a youth pastor, music minister and senior pastor in his service work, and he has also played guitar with various gospel groups. Steve and Annee told us a little about their wedding, explaining that it was a cowboy wedding. When the Minister asked if there was anyone that knew a reason that these people should not be married, Steve stood up, faced the crowd, and pulled back his coat to reveal his pistol. They told us the whole group laughed.

We spent a couple of hours with Steve and Annee while Steve played guitar and sang, and Annee sang along in perfect harmony with him. Out of all the songs that Steve sang for us, there were three songs in particular that really grabbed us – Ghost Riders in the Sky, Cattle Call and Amazing Grace. In between songs, Steve told us of things he had done and people that he had met with the WMA. In return, Angie and I exchanged stories with them both about our lives and how my mom, in her youth, had worked at a dude ranch in California and had met many movie stars. I also told him that she had known Dale Evans and Roy Rogers since they lived in the same area as my mom and dad. We all had a couple of good laughs at some of the stories that were told.

As the waning moon rose, we realized the day was at a close. Since we needed to make breakfast in the morning, we thanked him for his recital and we all called it a night. Angie and I are thankful that we were offered the opportunity to meet Steve and Annee and were able to spend some time with them telling stories, singing songs and just having a thoroughly magical evening. They have told us that they will be back again so it’s possible that when you visit us, you may run into Steve and Annee as they take more time to enjoy a romantic interlude at Down By The River Bed and Breakfast in St. David.

If nothing else, check Steve’s website out and listen to some of the music that he has posted on You-Tube. After listening to some of the songs, I am sure that you will realize that cowboy and country music are not the same.

Tags: B and B honeymoon, cowboy music, Romantic SE AZ b n b

This entry was posted 12 years ago on Sunday, March 27th, 2011. and is filed under Interesting Guests.