In mid July at Down By The River B and B, Angie came running in and told me that I had to see this. Now since she is from Wisconsin has been living here almost a year now, I wonder if she had found something I didn’t want to know about – like a rattlesnake. Having lived on the Arizona and California desert almost all my life, I am familiar with and have seen many plants and animals that survive in the dry climate. Well she found something a little different this time.

I went with her and she pointed at a pot with a tomato plant in it and said “What is that?”, I didn’t see anything at first but then I noticed movement in the mulch. There was a big eye and a head there and as she watered the head a little more a 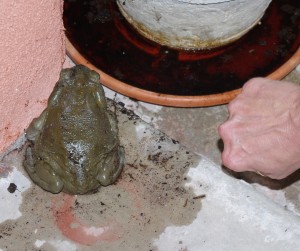 6 inch Sonoran Toad jumped out of the pot. I hadn’t really seen many toads until I had more down to St. David. The Phoenix area is pretty much paved over so toads don’t exist there as before. During our first monsoon season in St. David, we had our first encounter with a cacophony of noise at night. We would sit out and watch the rain and lightening and we would see the toads hopping around and croaking. I learned about these amphibians and their unusual lives in the dryness of the desert. I have seen two types of toads here at the B and B.

The Sonoran Desert Toad also known as the Colorado River Toad (bufo alvarius) is one of the largest toads in North America. The toad grows to between 7 and 8 inches long and is larger than your fist, as seen in the picture. The toad is greenish gray to greenish brown in color.

The Sonoran Green Toad (bufo retiformis) is smaller, under 3” in size and is a green or yellow green color with black stripping on the back and legs. 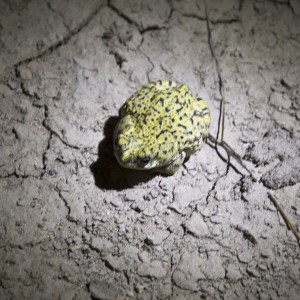 Sonoran Green Toadgreen to yellow green color with black stripping on the back and legs.

Both of these toads, common in the Sonoran Desert and found in south central and south eastern Arizona, can be found on the grounds of the b and b. These toads have bumps on the skin and the main poison glands are located behind the eyes and ears. The toxin is used as a defensive mechanism and is an extremely potent milky white color.  If the toxin is ingested it will cause sickness or fatalities in many cases. This usually occurs when the toad is picked up in the mouth of a predator. Dogs are particularly susceptible to the toxin and need immediate medical attention if they have bitten or licked a toad. There are predators that will eat these toads. During one weekend while we were banding hummingbirds, a guest came to us and said that there was a snake eating a toad. We went to look and saw a gopher snake about 30 inches long eating a large toad.  We figured that the toad was in a tree well and the snake came up behind it and grabbed the toad. It was a large toad and I was amazed to seethe small snake fit something that large down it’s mouth.  I don’t know if the snake survived but if it did I don’t think it ate anything else the rest of the summer.

These toads are slow moving and don’t come out of their burrows until the monsoons are active in the desert. During the year they hibernate, but after the monsoons start providing pools of water the toads become active. To see a storm video at Down By The River filmed by Rob Neep, a guest, click here. In this area that is from July to September. The toads feed upon large quantities of insects usually at night and they will sit around lit areas that attract the insects. Click for video. They are an opportunistic hunter; waiting for the insects to come to them.  The larger toads can eat smaller rodents such as mice and in some cases other toads. The toads can live at least 10 years but could live longer possibly up to 20 years.

The toads can be heard at night and there are different sounds such as croaking, chirping, whistling or wheezing. Click for video. At night after there has been a lot of rain from the storms you have a real concert that goes throughout the night. The croaking lasts for a while but dies off after the toads have mated and laid their eggs in the low areas that hold water. Females can lay thousands of eggs and the eggs hatch within 2 to 12 days. The tadpoles grow their legs in 3 to 10 weeks. After the monsoons quit, the toads go back underground to escape the dryer season and cold winters. I have read that some of the toads burrow up to 3 feet into the earth. There they will wait for the next monsoon season.

I always like to hear the chorus of the toads. That means that there is rain coming to the desert and the local plants will start to grow and desert flowers will bloom. Rain in the desert has a special smell that can’t be explained. But for desert dwellers in Cochise County it is a smell that tells you that the temperature will be less, the land and animals will be watered and the San Pedro River will run fast and deep. And you won’t wash your car until October.

This entry was posted 11 years ago on Saturday, August 13th, 2011. and is filed under Events and Things To Do, Nature.