In July, Angie and I were over by the Chiricahua National Monument and the park was closed at that time. During this last week in October, Angie, her friend Mary and I went to the Chiricahua National Monument to see what was burned, what was open and what structures were saved. We had hiked in that area about a year ago and I wrote on the blog what it was like. We started to head on up to Inspiration Point but decided that we didn’t have enough time to make that work. Now I wish we would have pushed a little harder and gotten to see it before the fire. Now we have to rely on other peoples pictures to see what it used to be.

The Horseshoe 2 fire started on May 8th and reached the park boundary in the Inspiration Point area on June 8th. It wasn’t contained until June 25th after 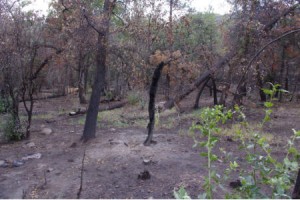 Fire Damage On The Trail

burning all the way down the canyon into the Visitor’s Center area. The fire burned almost 223,000 acres, 9 homes and 14 outbuildings. When the rains from the monsoon came, the flooding that occurred washed out areas that had burned since there was no vegetation to hold the ground in place. This made the terrain unstable and because of that the entire park had to be evaluated to make sure that it was safe for the public to use again. 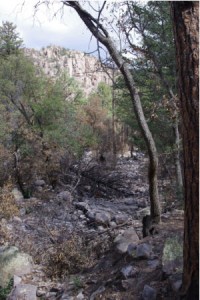 Rhyolite Canyon View From The Trail

have stopped and the area can be assessed for safety. The problem is that Bonita Creek runs through the campground so the chance for flash flooding must be over so that the area is safe to camp in again. The road to the top is also closed because a majority of the guard rails have been destroyed in the fire. Until this is repaired and the roadway is assessed for safety, the road will remain closed. The rangers that we talked to seemed to think that everything would be reopened around the beginning of 2012.

There is some good news concerning the park. Although use of the park is limited on access and camping, there is no cost to enter. The other good news is that the visitor’s center, the buildings at Faraway Ranch were not damaged and the trails in the park that were closed are now reopened. The drawback is that the only trail head to access the area starts at the visitor’s center. When hiking though you have to watch where you are walking since there are areas that may be unstable. Stay on the trails as these trails have been looked over for potential problems and have been cleared for use. We did do a short hike up Rhyolite Canyon while we were there and saw the damage that the fire did to the area. It is amazing that there are still some trees 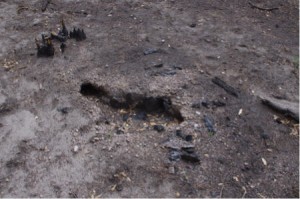 that haven’t been harmed while others were totally burned even down to the roots. There are grasses growing back and some cactus look like they didn’t suffer any burning. I took some pictures of the area including a place where a tree and the roots are burned up totally. This can be dangerous since there can be hollow areas under the top layer of soil where the roots use to be. Stepping on this can lead to a collapse

of the soil and injury to you, so stay on the trails. There is limited signs of bird 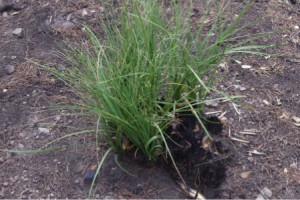 and animal life in the burned out areas but on our way out we did encounter a brown bear that was standing in the road. After a while the bear walked across the road in front of us and into the brush. We moved on up the road and stopped at the location that the bear was standing and took some pictures as he looked at us. He didn’t look like he was starving so that must mean that he is finding enough to eat.

Brown Bear on The Road 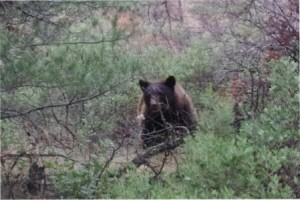 Brown Bear in The Brush

How long will it take the area to return to the original beauty that we saw last year, who knows maybe a couple of generations or more to get some trees back to the larger sizes that provide shade along the trails. Many of the trees that burned were hundreds of years old. I am glad that I have pictures and after the trails open up from the top again I will do some comparison shots to see just what was happened. The visitor’s center has some pictures of the fire in progress and also there are some before and after shots so you can get an inkling of what you will see when you go hiking into the monument.

This entry was posted 11 years ago on Sunday, October 30th, 2011. and is filed under Nature, Outdoor Recreation.