Raptor On The Hunt

Early in the morning during March and April and again late in the afternoon, we would see a great sight. In the morning while we were working on breakfast but before serving, we would see the raptor flying low over the fields behind the Down By The River B and B. Our southeastern AZ B and B is on the San Pedro River, one of the best migrating birding areas in the US. I later confirmed from a friend at The Tucson Audubon Society that the raptor was a female Northern Harrier. I wanted to be able to take some birding photography of the hawk in flight so that I could send the pictures into the Audubon for substantiation.

The hawk would only be 4 or 5 feet off the ground and moved with such agility that the guest and I were amazed at the quick twists and turns that she made in the pursuit of breakfast. Amazingly at times she would hover over a spot waiting for something to run and this ploy succeeded sometimes but not very often.  Other times she would be gliding along and then would just drop down on the ground. Many were misses and she was right back up on patrol. Other times she was down on the ground for a period of time. One afternoon while we were out working on the yard, we watched as she glided by then dropped down for a little while. After a period the Harrier started flying  but it took her a while to get altitude as she flew off towards the river. The hawk had something held in her talons that she had caught and though we were pretty far away we think it was a small rabbit.

When I am trying to do birding photography, like many other people, I find that the birds don’t cooperate. The frustrating thing for me was when I had my camera the Harrier was on the other side of the property. When she was close then I didn’t have my camera. One time I had the camera and the Hawk was close but my battery died just as my camera was firing up. By the time I got the new battery in the camera,  she had flown into a different part of the property. Such is the life of a photographer but at least with a digital camera you can take a lot of shots and discard ones that aren’t any good. In my case this is good since I couldn’t afford the film I would end up wasting. 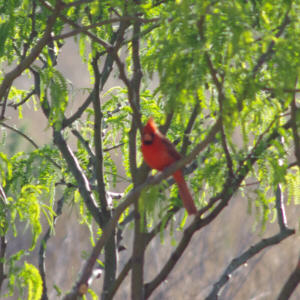 Finally one day I had the camera but I was trying to get a picture of a Northern Cardinal that was in a mesquite tree near the house. All of a sudden, the birds went quiet and flew into the mesquite and brush. I knew something had sent them to cover and started watching. I just thought it was one of the American Kestrels that frequent the property.  Then I saw the Harrier gliding over by the garage and come across the back. As I watched she flew toward the river and then made a turn parallel to the river over the brush. The hawk made the circuit in the back and then moved back across the fields coming closer to the house. I found a spot at the wall so that I would have a steady hand and worked the focus on my zoom lens. I was hoping that the Harrier would get closer and that I would be able to get a shot or two before she moved away.

Finally she got into range and I was able to take some pictures of her as she made a pass, turned, and then glided by us as we watched. It turned out to be the closest that she came to us because she kept on going south and left the property. The Harrier is so graceful in flight and it would be so much fun to be able to glide like that.

If it hadn’t been for Angie telling me that there was a cardinal in the back yard I would probably have been on the computer and missed this whole show. I wasn’t expecting her during the late morning since she was always around earlier or later in the day.  I just love the cheap seats when you can get them. Now because of a lot of luck and having a little skill, I can share this with you. 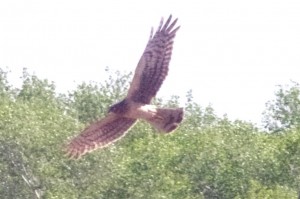 Northern Harrier looking for some lunch. 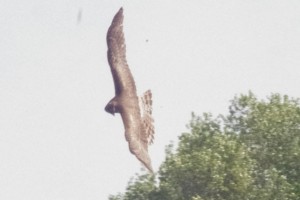 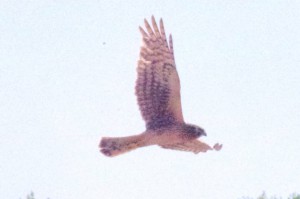 Northern Harrier flying back south on the property.

Tags: B and B birding, birding photography, San Pedro B and B, Southeasten AZ B and B