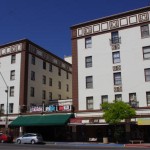 Gadsden Hotel was opened in 1907

Down By The River B and B is just the right location as an anchor site for lodging when you plan short day trips to different parts of Cochise County. There are a lot of things to do in Cochise county. Centrally located with access to the major highways that cross the county, Down By The River is the southeastern AZ bnb lodging that has it all. One of the locations that we have within a short distance is the City of Douglas. There are two particular things to see and do in Douglas. One thing to do is to stop and see the Gadsden Hotel. The second is to visit what is left of the San Bernardino Spanish Land Grant that is now the site of the John Slaughter Ranch and Museum. The ranch is located to the east of Douglas about 15 miles. I will be writing about that in the near future as it is a neat place to see.

On December 30, 1853, The United States purchased the land south of the 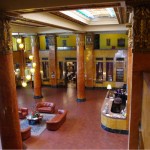 The Gadsden Hotel Lobby is large and open with glass panels in the ceiling.

Gila River in Arizona and New Mexico from Mexico by ratifying The Treaty of Guadalupe Hidalgo. The person spearheading this was James Gadsden who was appointed by President Franklin Pierce as the Minister to Mexico. Gadsden had an ulterior motive for the purchase. He owned a railroad and with a group of investors had learned that the only southern rail route to the west cost of the United States would have to run through a portion of Mexico. After working for a short period of time Gadsden was able to persuade President Santa Ana of Mexico to sell the 45,535 square miles of Mexican territory to the US for about 33 cents per acre.

The Gadsden Hotel, named for the Gadsden Purchase, is located in Douglas, Arizona and is within a mile of the Mexican border. The hotel was first opened in 1907 and has had many dignitaries and famous people have stayed there. Eleanor Roosevelt, most of the Arizona Governors and movie stars including Lee Marvin and Shelley Winters have been guests at the hotel.

The 5 story hotel was state of the art when originally opened. The lobby is large with tall columns that support the roof. Each of the columns are painted in 14k gold leaf which at the cost was $20000. The ceiling of the lobby is decorated with stain glass panels that run the length of the lobby. The mezzanine is also home to an original Tiffany 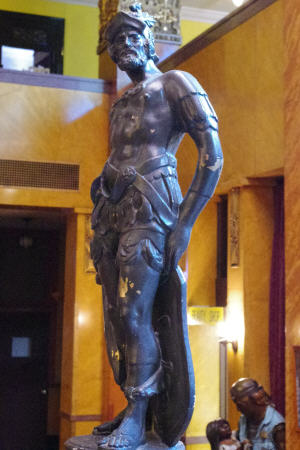 Greek Warrior statue at the start of the stairs.

stain glass mural that covers over 40’ of wall space. The desert scene in this glass mural is beautiful to behold. An original oil painting by Audley Jean Nichols is located below the windows while two Greek warrior figures are positioned on the posts at the start of the staircase banisters.  The hotel still has the original 1929 telephone switchboard, reportedly the first of its kind to be installed in Arizona, and has one of the oldest manually operated elevators west of the Mississippi. The switchboard isn’t used anymore but does make a fine display behind the front desk. The Hotel was placed on the National Historical Registry and was proclaimed a National Historic Site in 1976. It fell into disrepair and was purchased in 1988 by the present owners. They have since brought it back to the beautiful state that it is in today. The dining room and the barroom are located off the lobby. The meals served at the dining room are quite good and we have eaten there and found the cuisine to our liking. 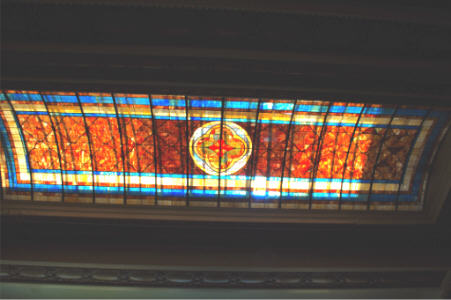 Some Trivia about the hotel is told by the staff. This includes a list of movies made on the premises including “The Life and Times of Judge Roy Bean” and “Terminal Velocity”. One of the items of gossip is that Lee Marvin was almost in a barroom brawl at the hotel. It is reported that Pancho Villa rode his horse up the staircase of the hotel to the mezzanine. Critics say that wasn’t possible since Pancho Villa was killed in 1923 and that the hotel had burned down and was rebuilt and opened in 1929. However, the hotel management point to newspaper accounts that indicate the Italian white marble stairway survived the fire and that Pancho Villa did the ride before the hotel had burned.  There are staff members and guests at the hotel that state that the hotels is haunted backing it up with accounts of the sightings. The mezzanine has glass cases with memorabilia on display. There is also pictures on the walls of the old town of Douglas and the events that happened.  It is interesting to spend some time there and look at the grandeur that is on display. 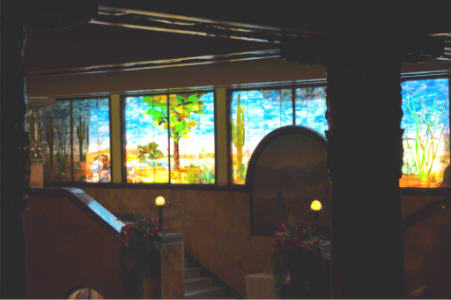 The original Tiffany Glass window spans over 40 feet of wall area and is 8 feet tall.

This entry was posted 10 years ago on Friday, October 5th, 2012. and is filed under Events and Things To Do.