The Adventures of Rocket J. Squirrel and Pepe Le Peeuuuh

Down By The River B and B is located on the San Pedro River in SE Arizona. Being so close to the river, we have a lot of wildlife that frequents the property. The San Pedro River is a water source that flows throughout the year and is above ground near the bnb usually until late June just before the start of the monsoons. The water source draws all types of animals and birds into the area. We generally don’t have problems with pesky critters, although the deer do give us fits with tree damage and rodents dig holes in the middle of trails and around the plants. With that being said we usually enjoy watching the activities that go on around us.

At the beginning of November while working on cleaning up the yard, I needed to get a rake out of the shed. As I walked toward the shed I noticed a movement in the brush behind the garage. It didn’t look like a rabbit but then I wasn’t really looking that close. We have a lot of cottontail rabbits and a few jack rabbits around so I just assumed that Peter Cottontail was out foraging. A couple of days later as I looked out the double doors I saw a squirrel meander across the stoop. I knew that I didn’t need a squirrel around and so I went out the main door and tried to scare the squirrel away. As I came around the corner, Rocket J. Squirrel made a b-line behind the shed.

He was safe from me but I decided to bang on the shed to see if I could get him to vacate the premises. We played cat and mouse as he moved from one side to the other as I banged on the shed. We played this game for about 5 minutes until he decided to beat a hasty retreat out past the garage into the fields to the south. I kept checking for the gray squirrel for the next couple of days and didn’t see him near the shed at all. I felt that I had given him good reason to decide relocation was a better option. Hoping that he had moved to a locale inhabited by Bullwinkle, far away in Minnesota, I forgot about Rocky.

Then one morning, our cat became real agitated. Looking out onto the patio, I spotted Rocky. The brazen little critter was sitting up on a chair looking over the territory. I went out the door and he saw me but then turned back to look at what was going on in the yard. Not until I advanced did he decide to run for it. Rocket J is a good name for the streak of gray that flew by me on the way to the other side of the house.

Another week passed as I decided to work on the mesquite trees at the bird room patio. As I got back there I noticed the furry little bugger. Yup, Rocky was back and now he had a burrow under the house at the bird room. Rocket was down the hole before I could get close. Just what I need is a fur bearing critter under the house. I figured that I could trap this rodent. I am smarter than he is. No big deal. Get a trap, bait it and the work is done. Not so fast fool! Rocky J is a little slyer than you thought. Rocky trips the trap, eats the bait and then goes back into the burrow to excavate more. All I do is give him free meal delivery to the front door. I can’t even catch him out away from the burrow and bury the entrance before he can get back. He isn’t named Rocket J for no good reason.

So as I realize that Rocky is not the pushover I thought he was. I decide to bite the bullet and bring in the big boys to take care of this. In step the pest control people with a live trap. As it is set up, I comment that this trap looks a little large. But I am assured that this trap will get Rocky. It is made for skunks and raccoons and will still trip with a squirrel’s weight. OK, so let the fun begin. The trap is set next to the hole, baited and now I am assured that this will work. Rocky will be caught in a quick fashion and transported to Frostbite Falls, MN, never to dig a hole under my house again.

Nothing happens for 2 days except that Rocky fills in the one entrance and digs another one at a different place away from the trap.  I even see him in the trap having a snack and think – “Aha got him!” ….but no he didn’t trip the trap door. Rocket beats a quick path to the burrow again, filled tummy and all. That night our cat gets all agitated again as Angie and I are having supper. Angie spots a black and white animal walk past the door at the breezeway. We have just seen Pepe Le Peeuuuh and that first introduction to Pepe is a nonevent. We had two rooms with guests and expecting a third couple to show up later that evening.

The next morning is Thanksgiving so naturally the fun begins. Remember Pepe?  Well he is not just wandering 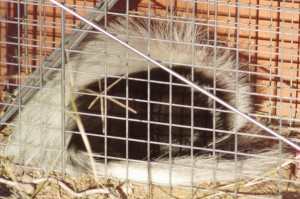 Pepe asleep in the trap on Thanksgiving day.

around anymore looking for adventure. No he is holed up in of all things the live trap. He is sound asleep, just like our guests. Pest people, they don’t work on Thanksgiving; they are home with the family. But I have paying guests and Pepe the moocher, who is not one that I want to have around. I call anyway and plead my case and am assured that I will get a call. I just know that it will be Friday before anyone shows. But low and behold I do get a call and maybe someone will be there in the afternoon. I inform the guests of Pepe’s presence and we all keep our distance although I did get some pictures from about 10 feet. Chris, with 30 years experience, showed up and gave Pepe a relocation trip that afternoon but the trap was not returned that day. I thought one would be back on Friday but it was Monday. During the respite, Rocky had the run of the yard and was expanding the burrow to 4 maybe 5 rooms. The mounds of dirt grew and it looked like someone emptied a couple of wheelbarrows around the house. 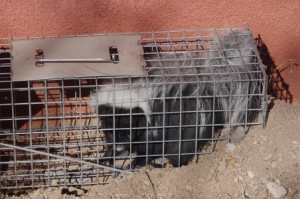 Pepe like the food so much he came back to dine again.

Great, just what I need, more excavation under the b and b. But Monday is soon here and a new smaller trap is brought. This is going to work. I just know it. Shouldn’t catch anything but Rocket and then life will be good again. We can hardly wait. With dawn I get my coffee to go next door and get things ready for the morning breakfast. Ah but first I want to check the trap. Oh boy the door is down. Rocky you are mine. But hold on a minute….that doesn’t look like Rocky. It looks like Pepe. It is Pepe! I make a phone call to Chris and tell him that the trap is full. He says great he will come out to get Rocky and I tell him not so fast. It is our friend Pepe. He came back because the food was so good. Well Chris didn’t show up to do the removal this time, Shawn did. Shawn had never removed a skunk before so he got dressed up to keep himself protected.  I took a video to show what was the trapping process is. I don’t know what happens when it comes to getting Pepe out of the cage. That might be a little too close for comfort for me.

Now I get a third cage even smaller than before but there is a question that is posed. Since we got Pepe twice

Rocket J Squirrel finally got his little self caught and is ready to visit another locate far away.

at the burrow maybe the skunk ran Rocket J off. Have to see if anything is caught or seen. To tell the truth I hadn’t seen Rocket so maybe he was gone. So to test that theory I decide to fill in the holes and see if they reappear. Nothing happens all day but the next morning there is another new hole to the burrow. That make 6 entrances that I know of, five of which I have filled. So I set the trap next to the burrow and add some rocks to block paths. The next morning, SUCCESS IS MINE! Rocky is trapped.

It has been 3 days now and no return of Rocket J. Squirrel or Pepe Le Peeuuuh! Hopefully the rest of the year will be uneventful and we can enjoy the Christmas Season without the worry of having a basement bungalow under the b and b.

This entry was posted 10 years ago on Tuesday, December 4th, 2012. and is filed under Nature.

One Response to “The Adventures of Rocket J. Squirrel and Pepe Le Peeuuuh” Comments are currently closed.