Southwestern Arizona offers many experiences to give you the “Old West” feeling. One of the things you can do in Cochise County is to go underground on tours such as Kartchner Caverns in Benson, The Copper Queen Mine in Bisbee and The Good Enough Mine in Tombstone. Each has its own charms and I have experienced them all. Angie and I were in Tombstone prior to the Rose Tree Festival and after touring the Rose Tree we decided to take in the mine tour. We got to the Toughnut Street location 10 minutes before the tour began. Early arrival allows you to look at the old mining equipment that is on the property.

The Good Enough Mine Ticket Office is open for business.

I will give you the short history behind the mining that was done in Tombstone. In 1877, Ed Schieffelin found an ore deposit and filed a claim. He called the mine the Tombstone, because he had been told by his friends that a tombstone was all he would find looking for ore in the Apache wilderness. That is how the town got its name. In 1878, he filed another claim for the Good Enough Mine. Over the years, Ed filed 19 different claims. The mining tunnels from the different mines intersect in places. Ed and his partners also established a lumber mill in the Huachuca Mountains and a stamping plant to process the ore in Contention. Tombstone became the largest town between San Francisco and St. Louis. In the end Ed, his brother Al and a mining engineer, who were partners, sold their mines to Consolidated Mining for $600,000 each, $12 million in today’s dollars. The mines turned out to be one of the richest strike in the southwestern United States.

After the company that owned the mine decided it wasn’t worth anything, The Good Enough Mine was purchased by the ex mayor of 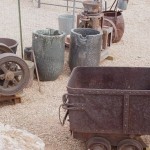 Mining Equipment is available for you to check it out.

Tombstone and his wife for $2000. They wanted to bring back something that made was the reason for Tombstone to exist. After the purchase the real work began. As the mine had been abandoned, the shafts and tunnels were filled with trash and dirt. Over a 6 year period, the debris was removed from the mine, paths were made and the walls were washed down so that visitors could see minerals that were still in the walls. The paths were made smooth and relatively level with the exception of the stairway which takes you down to the main mine trail. In places the roof of the mine tunnels are painted red where the rock hangs down. Head protection is needed and hard hats are available if you don’t have one. Prior to the tour opening, the mine was inspected for safety and there are some areas where additional safety 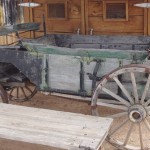 Ore wagons were pulled by the mule teams to the Contention stamping mill for processing the ore into silver.

screening and shoring have been added to stabilize the rock. The organized tours were started about a year and a half ago and the experience has been improved by the owners over the years.

At the beginning of the tour, our guide introduced himself and gave us a demonstration of what it took to drill holes in the rock walls by hand. The drilling was done so that dynamite could be placed in the rock face. Unlike the western movies where miners were using picks and shovels to get the ore out, miners needed to blast the ore deposit into pieces that could be loaded on to carts and brought out of the mine. The video I made gives a 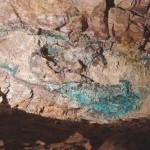 You can see the copper ore still in the mine. This was a silver mine but copper, gold and lead were also found here.

demonstration of what it took to drill a hole into the rock. After the demonstration, we walked down the slope toward the wash and into the mine entrance.

At the entrance we were told about the debris removal and what we would see during the tour. The mine was worked for many years from the 1880s into the 1930s. Our guide said that he had found an El Paso newspaper down in the mine dated 1908. We were also told that one of the urban legends about the mine being flooded is only partially true. As the miners dug deeper chasing the silver ore, they reached a level where water entered the mine. Pumps were brought in and installed and pumped the water out until the miners reached the 700 foot level. When the pumps failed the water returned to the 500 foot level again covering the pumps. The mine never totally flooded but mining below 500 feet is not feasible. 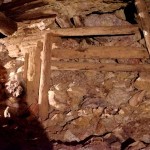 Shoring the ceiling with big timbers kept the mine roof stabilized.

The mine tour starts with stairs that go down 70 feet to the loop trail that has been made in the mine. The entire trail is lit and there are specific side areas and niches that are lit for people to see different aspects of the mine. Our guide pointed out tunnels and shafts that were roped off. He explained that the entire inner-connecting complex of tunnels goes under the town of Tombstone and out into the surrounding areas. To illustrate his point he showed us one that goes under the wash and comes out at the Toughnut Mine entrance. The mine is a man made hard rock cave and if you are claustrophobic, it isn’t not for you. The miners followed the ore wherever it went, horizontally or vertically. Some passages are low and narrow and other places being are large rooms with 30 tall ceilings.
The miners spent 12 hour shifts in the mine and worked by candlelight at the beginning. Carbide lights were introduced much later in the history of the mine. Unlike coal mines, there was no gasses emitted from the deposits and explosions from a live flame did not happen. The air is fresh in the mine. The complex of tunnels creates a draft that is flowing throughout the mine. We were shown some of the items left by the miners in the tunnels from tools to empty cans of food. The mine structure is sturdy and has some shoring. An earthquake in Sonora Mexico in the 1890s didn’t affect the structure at all. There are some areas of town on Toughnut Street that are collapsing due to the mine. If you go to the Courthouse, there are detail drawings there that show the mine tunnels and the levels of the mines in Tombstone. It gives you some more information on just how big the tunnel complex is.

Near the end of the 1 hour tour, we were shown some ore samples from the mine. Most of the silver from the mine was shipped off to New Orleans and was minted into coins. We were also told of a more extreme tour that is done on Saturdays and it takes about 3 hours. The Toughnut mine tour goes back into areas of the mine that are seldom seen. This tour requires a minimum age of 10 years old, hard hats, lighting and water. It is advisable that you have old clothes, gloves, knee pads and protection for scrapes. When you are making plans to go on any of the Cochise County underground tours, remember that your lodging choice should be Down By The River B and B, “The Lodging Hub of Cochise County.” We are located in St. David about 20 minutes from Tombstone and our San Pedro River BnB is perfect for that quiet relaxing stay in Southeastern Arizona.

This entry was posted 10 years ago on Tuesday, April 16th, 2013. and is filed under Events and Things To Do.