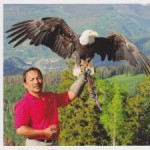 Kin with a Bald Eagle during a demonstration from HawkQuest Literature

We had the pleasure of hosting Kin and Patti Quitugua from HawkQuest during their stay at our San Pedro River B and B. During their stay I found out that Kin had originally lived in Guam before finally ending up in Parker Colorado. I talked to him about HawkQuest and what his business did. Kin was one of three co-founders of HawkQuest back in 1986. The purpose of  HawkQuest is to educate people about raptors and their place in the ecosystem while sharing the message concerning biodiversity and nurturing respect for our land and stewardship of the environment.

The goal is to make education fun and meaningful for the people that attend the programs that HawkQuest puts on.  The education process allows for the audience to be part of the experience while learning about the hawks, eagles, falcons and owls. The team brings the birds to different venues for persons of all ages, preschool children to senior citizens. They will do lectures about birds of prey, HOOT – hands on owl training, and Classroom in the wild where Harris Hawks fly in the open and show off their hunting skills. They also do booth appearances at shows. 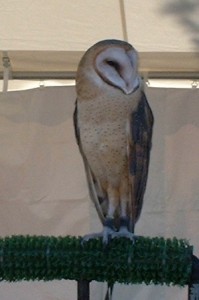 Barn Owl in Tubac at the Arts Fair.

The funny thing is that after we introduced ourselves, I was able to remember that Barb and I had gone to Tubac during an art show about 5 years ago. At that show we came to a booth that had eagles, hawks and owls perched in the open. The birds were calm and the handlers were telling everyone about the birds. I told Kin about this visit I remembered we had in Tubac and then found out it was his company HawkQuest that was at that show. I still had some old pictures so I printed a copy of them  and showed the photos to him. Kin laughed and said yes that was one of his associates that was holding the eagle.

During the time that Kin and Patti were here, they headed down to the San Pedro River behind the BnB. While birding, they were lucky enough to see a Peregrine Falcon flying up the river. Kim knew what the bird was because he has a falcon that he flies during his demonstrations. We have never had anyone tell us about seeing this bird while visiting and so we are adding this to the website and crediting Kin for the view. 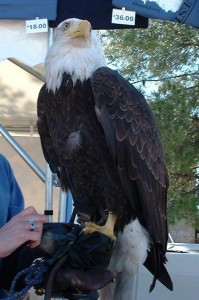 Bald Eagle was the hit of the show with everyone wanting the photo.

Shows you how small a world this really is doesn’t it? The next time you decide to take a short break and do some birding and you don’t have time to go to Colorado to see the people at HawkQuest, think about Down By The River B and B in St. David, AZ. We are centrally located and short distances to many locations in Cochise County. We are the B&B that is the “Lodging Hub”  in Southeastern Arizona.

This entry was posted 9 years ago on Sunday, April 21st, 2013. and is filed under Interesting Guests, Nature.