Building a B and B known as Down By The River

Building a B and B called Down By The River has many interesting stories. 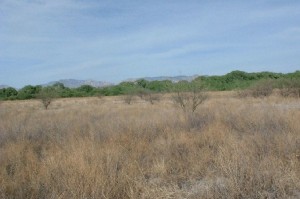 When we saw the property there was nothing here except for the natural vegetation.

Before we built our San Pedro River B and B, we wanted Down By The River to have a design that was a unique and would make people go wow. Building a B and B from scratch is quite an undertaking. We did a lot of research on what we liked and what we didn’t like about other b and bs. We made a plan to get all the things to work right. The details need to be put together so that you have a path to reach your goal. Barb and I began 2 years of research determine we wanted to do, what the market was and how to make the pieces fit together. There are many things to consider prior to building a b and b including setting up systems for financial and legal requirement, website design, marketing and determining location, menus, themes and clientele. Buying something that is established is always easier. 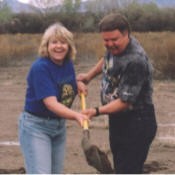 Setting all other items aside, the construction aspects of building a b and b from scratch can lead to some interesting challenges. We decided a conventional building with a gable roof didn’t provide the wow factor Barb wanted. After much review, we settled on a Spanish Territorial or as it more commonly called a Santa Fe style. We wanted to have a building that was more in line with the buildings that would have been built by the pioneers that came into the territory. We decided that this style of building would be incomplete if there was no bell tower installed.

Many guests have ask us who the architect was that designed the building. We tell them that Mike did. Then they ask how did I know what to do and where did I come up with the plan? I tell them that I was in the construction business for 38 years. Further I explain that the plan originated almost 50 years ago. An assignment in a high school architectural drawing class was the origin of the plan when I started building a b and b. Our last project was to draw a house we would like to build one day. Little did I know that one day I would take that old plan and modify it to fulfill the dream we envisioned in our San Pedro River b and b. 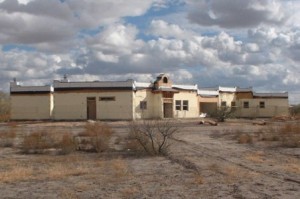 Down By The River under Construction with the bell tower framed in.

In the design for Down By The River, I placed a bell tower above the main entry. All I needed was a bell to position in the tower. It could be large, small, real, metal or plastic; it should be easy to find one right? Barb in all her wandering of antique stores, junk shops, yard sales and fairs never saw a bell. We started to think that we wouldn’t ever find one and there would be an empty hole where the bell should have been. But fate had other plans for us – My Dad!

Except for his service in the Navy in WWII, my dad worked all his life for a cement plant in California. During his tenure, my brother and I were given the chance of a lifetime. My dad was good friends with the engineer that ran the train for the plant. My dad was able to have us ride an old steam locomotive that brought the limestone from a quarry down to the main plant to be processed into cement. We were able to stand in the cab next to the engineer and each of us rang the brass bell on the engine. When the engineer retired, one of his retirement gifts was the bell off the old locomotive. The cement company retired the locomotive to a train museum in Southern California. Click here and you can see the old train and a little of the history about it. 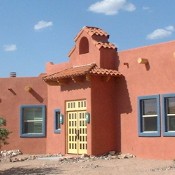 The bell tower was finished it just needed the bell installed.

The engineer moved to Oregon and took the bell with him. My parents retired and used to go up to Oregon to go salmon fishing and have a visit with my dad’s old friend. During one of the visits the engineer told my dad that he was dying of cancer and that he wanted to give him the bell from the locomotive. No one wanted it and he had no one to give it to except my dad. So the bell ended up in California again.

Barb and I were visiting California and during the visit, we explained to my parents about the frustrating time we were having trying to find a bell. The process of building a b and b had started and were having no luck with our search. My dad smiled and said he had just the thing for us. He took us out to the garage and pulled a blanket off of the bell. Then he asked us if that would work. He then explained how he had gotten the bell and that it was the one we rang when we were riding in the locomotive. It certainly took a long time to come full circle but the bell and building a b and b all started about 50 years ago. 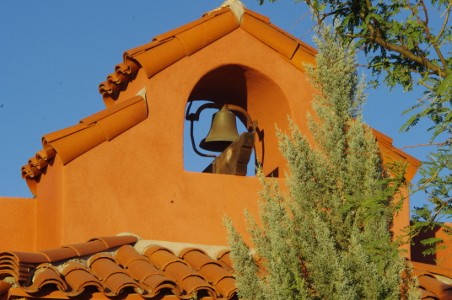 The bell is in the bell tower and when I am on the roof, I take the time to ring it at least once.

So if you decide to come to Southeastern Arizona you need to stay at Down By The River and hear the other stories we have about building a b and b. There are many other stories to be told. You can even see the bell in the tower but unless you are on the roof you won’t be able to ring it. I still haven’t figured an easy way to set the bell rope up so that we can ring the bell. But when I am on the roof, I do ring it a few times just to hear that wonderful sound. So as Paul Harvey would say “Now you know the rest of the story.”

This entry was posted 9 years ago on Tuesday, August 6th, 2013. and is filed under Down By The River FAQ.