Our Southeast Arizona B and B hosted Bill Templeton

Artist Bill Templeton visited our Southeast Arizona B and B 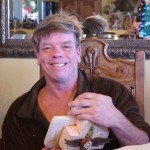 Bill told us that was an artist. He said that he was born in Illinois and grew up in the Chicago area. In school Bill continued working in different media and finally he went on to graduate from The University of Arizona in Tucson. He told us that his artwork was available through galleries in various parts of the country. Now that he is an established artist, he is working at becoming independent and wants to stop using the galleries because of their high commissions. 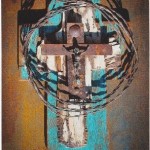 Over breakfast at our Southeast Arizona B and B, he talked to us about his art and the different things that he had done. He brought out a box of cards that he had that showed much of his artwork. Bill enjoys making his art and he creates his work with bold bright colors. The subjects that he paints are from his experiences and travels. His artwork carries a theme for a series and then he will start a different series with another theme. He showed us the cards that he made using his art from his trips to Mexico and the Caribbean.

through a window to see the scene on the other side. One card he left with us is about three partying pigs. The picture is full of hidden gems as is much of his art. Looking at the picture you can pick out glasses, bottles corn and pearls on one pig that are hidden in the scene. This all reflects the humor in the picture. 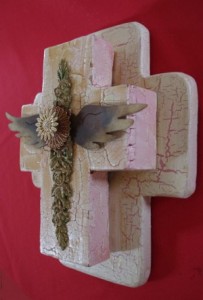 Bill also showed us another of his talents. He is making crosses out of various types of wood and finds old crucifixes to provide the figure of Christ for his cross. He also uses other materials in place of Christ. Angie bought one that is pictured here because of the way it looked and its uniqueness. Bill says he never makes two crosses that are the same. After talking with him, I thought of the crosses and what I have done with stain glass crosses that I made. He inspired me to see if I can produce those at another level.

Bill has his studios in Scottsdale and Pine, Arizona. You can view his work on his website.

This entry was posted 9 years ago on Wednesday, January 15th, 2014. and is filed under Interesting Guests.