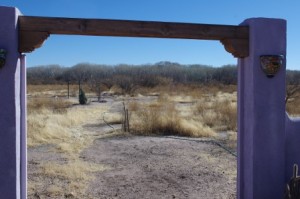 From the back patio of Down By The River there is a path to the tree lined San Pedro River.

A birding hotspot on the San Pedro River is the Riparian National Conservation Area which is located just south of Down By The River B and B. Down By The River is abuts this birding hot spot and has access down to the river by a couple of ways.. One way is to travel about one half mile from our San Pedro River b and b property on Efken place back to Escalante Road and from there east to the San Pedro River. The other access is a pathway that has been established across the property of the b and b, through a gate and following a cut trail to another Texas gate. From there a path has been cleared to the river. 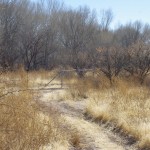 The path leads to a gate to exit the property at the b and b onto a common area with a path that leads down to the river.

The birding hotspot on the San Pedro River is because it is a migratory path for the birds heading from Central America up into the Northern States and Canada. While there are many birds that live in this part of Cochise County year round there are up to 250 different species that use the San Pedro River for food and water as they fly through. There are birds that also winter in the area and when it warms up they fly back north.

Angie and I took some time recently to take the trail down across the property and through the two gates to the path leading to the San Pedro. We cleared brush and burrs from the trail to make it easier for guests to use. When we got to the bottom and came out on the banks of the river, we could hear the chatter of birds in the trees.  Even in January the birding hotspot on the San Pedro River found on the length of the river wherever water is above ground. 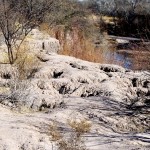 The bank along the San Pedro River is treacherous and if you go off the path.

As we walked the river, we spotted numerous birds although most were on the wing and we weren’t able to make an ID. There were 3 that we were able to get pictures of. One was a flycatcher but we weren’t able to get close enough to make a good visual as to the species. Many different flycatchers are found on the river. The other was a Northern Flicker that let me walk up close enough to photograph him. He was in a tree about at about 20 feet up on a branch and eyed me as I moved closer. I was able to get a good photo of him. The third bird was a song sparrow that was in and out of an old stump that had been washed down the river. He played hide and seek with us until I was finally able to get a few pictures of him so that I could get an ID later.

Unidentified flycatcher was spotted in a tree 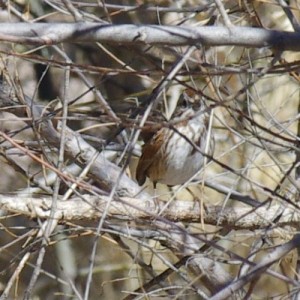 The Song Sparrow was hiding amongst the branches in a old stump along the river. 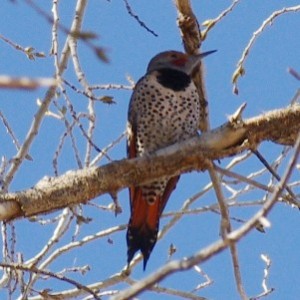 This entry was posted 9 years ago on Wednesday, January 22nd, 2014. and is filed under Down By The River FAQ, Nature.