Southeastern Arizona B and B

Southeastern Arizona B and B Submits Winning Picture

Our Southeastern Arizona b and b was invited to enter a photo contest by one of our online marketing agencies that we use. The Bed and Breakfast Online photo contest was held in February and about 60 b and bs submitted their photos. We reviewed many different pictures that we have or our Southeastern Arizona b and b. There were a few pictures that we felt might be a candidate for our contribution but in the end we realized that this one picture would be the best to place into the competition. If selected, the winning photo would be included in the slide show on BBOnlines website for the month of March. On the 28th of February, we were informed by BBOnline that we had won the competition and our photo would be placed on the website. 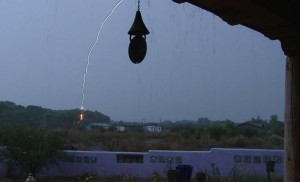 During the monsoon storms lightning can be filmed from the cover of the patio.

We believe that our Southeastern Arizona b and b won this photo contest because of the expertise of the photographer.  Our prize winning picture was taken by Robert Neep during one of his visits to Down By The River B and B. Rob graciously allowed us the use of this picture for our marketing and promotions. The picture was taken during a July monsoon thunderstorm that developed just south of our Southeastern Arizona b and b.

Rob has come to Down By The River B and B over the last 5 years to pursue his passion for filming thunderstorm. His website features some of the videos that he has filmed during his stay at our Southeastern Arizona b and b. The videos of the storms that he has filmed in Cochise County, Arizona are really breathtaking. During the July and August monsoons, 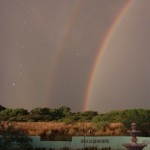 A double rainbow is on display during a monsoon storm just at sunset.

the desert heat and high pressure north and west of Saint David draws the moisture into Arizona from the Sea of Cortez in Mexico. The thunderstorms build during the day. In the afternoon continuing on into the night you can see natures fireworks light up the sky and clouds. The monsoons bring much needed rain into the desert during the summer months and make this part of Arizona lush and green.

Summer monsoons at our Southeastern Arizona B and B are amazing. The thunderstorms build during the day and the rains moderate the temperature of the days heat. The display by Mother Nature cannot be beat. It is one of the best places in the US to see thunderstorms without having the danger of an accompanying tornado. As an added bonus, the sunsets top off the day with brilliant colors. Book a room and find out what happens at our Southeastern Arizona B and B during the monsoons. You may have a chance during your stay to film a fantastic light show put on by Mother Nature. 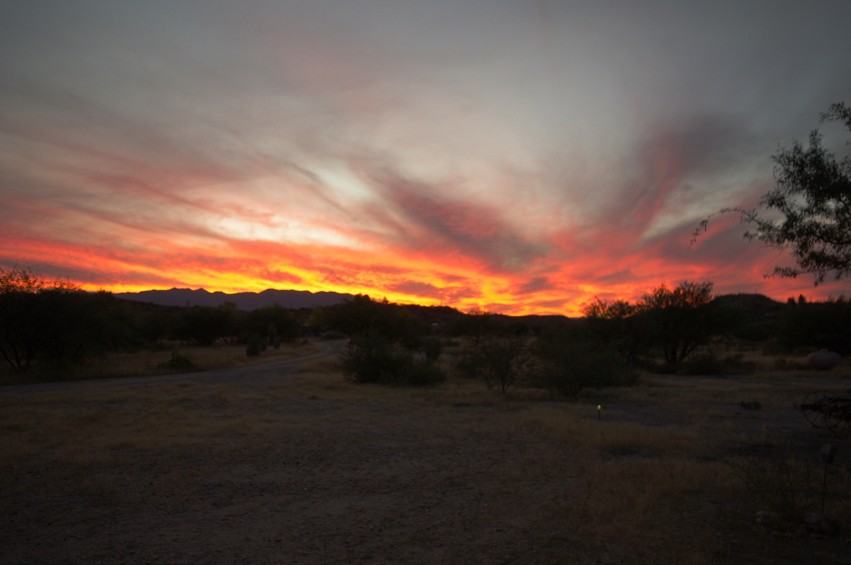 The high cirrus clouds allowed for a flaming sunset.

This entry was posted 9 years ago on Monday, March 10th, 2014. and is filed under Down By The River FAQ, Interesting Guests, Nature.