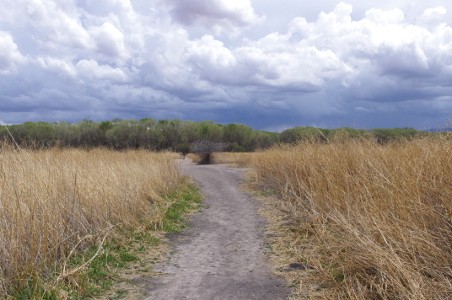 Birding the San Pedro House start with the trail heading east to the river. 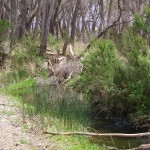 Birding the San Pedro house river trails is a tranquil and soothing time.

From the San Pedro House, we took the direct route east to the San Pedro River. There are no facilities along the trails so take plenty of water with you. As you near the river the trail splits with one section running north along the river, ending on Escapula Road just north of the old Clanton Ranch ruins. Yes this is ranch homesite of the Clantons who were in the OK Corral Gunfight. The trail follows the river north under the Arizona 90 bridge over the San Pedro and up to an old railroad bed. Follow the bed to the north to the Clanton ruins or back south while birding to the San Pedro House.

The riparian forest in this part of the river is shaded and if you are patient you will see birds flitting around the trees and underbrush. We were watching Ladderback Woodpeckers, warblers and some unidentified brown birds. We spent some time watching the birds but decided that if we were going to get a perspective of this preserve we needed to head south to the pond areas. The trails gives you a choice of directions. You can head over to the Dry Ox Bow which is a Cottonwood Grove was on the river at one time but now is dry or follow the river. We decided to follow the river and see what activity we could find along the San Pedro. 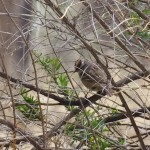 An unidentified brown bird is found when birding the San Pedro House trails.

The tranquil setting is perfect for birding the San Pedro House trails. Down along the banks of the river you find different insects that provide food for the birds. Tent caterpillars were all over in the trees. There is a good flow of water in the river at this point. Birds can be seen in the trees and brush. We enjoyed the Northern Flicker as it moved in and out of our sight on the tree branch. We also discovered a Ladderback Woodpeckers nest in a tree. It flew to a tree so I thought it would be a good place to get a photo.

I looked for a while and finally saw him stick his head out of the hole and chatter at me to leave. The female stopped by and stayed a little above on another branch waiting for us to leave. We finally obliged and headed off to Green Kingfisher Pond. The Green Kingfisher Pond is an old quarry that has filled with water over time. It is not connected to the river but remains filled. At this pond we were greeted by an American Coot, the Vermillion Flycatcher and Wilson’s Warblers. 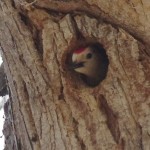 We decided that we would head back and not go to the Black Phoebe Pond. Our time was starting to run short and we wanted to get to Bisbee before the day ended. There weather was also starting to get a bit blustery and we didn’t want to be caught in the rain. It started drizzling as we reached the car so it turned out to be a good decision. We definitely enjoyed our outing and it will be on our list to return here in the future to do a little more exploring. The San Pedro House is a short distance from Down By The River B and B – The Lodging Hub of Cochise County. 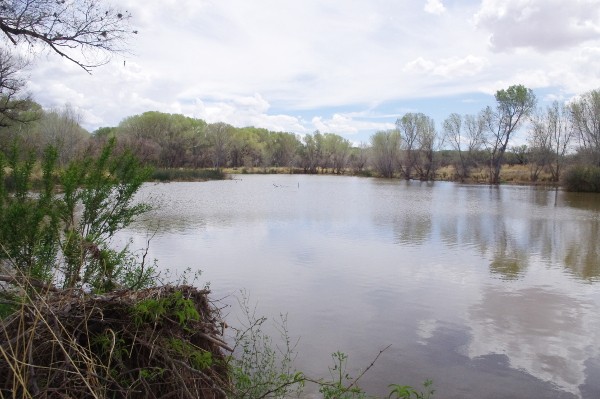 The Green Kingfisher Pond can be found when you are birding the San Pedro House trails.

This entry was posted 9 years ago on Friday, May 2nd, 2014. and is filed under Events and Things To Do, Nature.