Tombstone October Events Are A Must See And Do At Least Once. 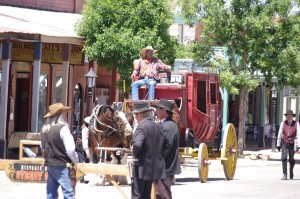 Tombstone has a cast and crew of cowboys walking the streets during operating hours. Special weekends have gun fights and other special events.

Tombstone October Events are just right for that person that would like to see an Old West spectacular celebration. Dodge City and Deadwood have celebrations but in my opinion the best time to get the most out of your “Old West” experience is to head for Tombstone. The Tombstone October events week starts off with the Wyatt Earp Vendetta Ride and culminates with the second event, Helldorado Days.

The Vendetta Ride is a historic five day ride on horseback to many sites where Wyatt Earp, Doc Holliday and his posse rode as they chased down and had shootouts with the “Cowboys”. The Cowboys were associates of the Clantons, known rustlers and killers. The horseback ride is mainly in Cochise County and you will visit sites where Curly Bill Brocius, Johnny Barnes and Johnny Ringo were killed. The rides start at a different place each day and you will be transported to the starting point for that days ride. Three meals a day are provided. To get more information, click on the link to Great American Adventures for this part of the Tombstone October Events. This year the event is held from October 12 to the 17,  2014. 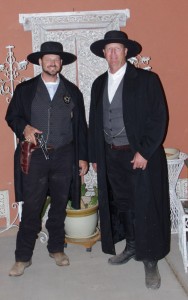 Smile when you say that!

The second of the Tombstone October events starts just after the Vendetta Ride concludes. The 85 th annual Helldorado Days is held on October 17 to 19, 2014.  This is the premiere festival held in Tombstone. Where does the word Helldorado come from? Well according to some Tombstone aficionados it comes from an old miner who complained about his experience. He wrote  into the Tombstone Nugget Newspaper that most of the miners that came to find their El Dorado ended up doing menial jobs like washing dishes and only found Helldorado.

Tombstones Helldorado days takes its name from this miner’s grievance. Helldorado Days is the longest running event in Tombstone. It started in 1929, the year Wyatt Earp died. I don’t know if that was a coincidence or not. Each year this Tombstone October Event is held on the third weekend in October and is sponsored by Helldorado Inc.  If you can’t make the festivities this year keep that third weekend in mind for another time.

This year the Helldorado Days event will include a raffle for an 1851 Sheriff Brass 44 cal Black Power Revolver. The drawing will be held on Sunday the 19 th at 4 PM. Other event activities include a parade, entertainment by various cowboy re enactors during the festivities, a beard and mustache contest and of course, the famous Walk Down to the OK Corral. There will be many people that show up in the period dress who are not part of the entertainment. It is always a fund time and you will be able to get some great photographs during these Tombstone October events.

Lodging for visitors usually fills up fast. It is not unheard of hotels, motels and b and b having no occupancy 3 or 4 weeks out prior to the Helldorado Days festival. We have had many people stay at our B and B and head to Tombstone dressed to the nines for their day of fun. Down By The River B and B is located outside of Tombstone in St. David. We are a 20 minute drive to the “Town Too Tough To Die”. Check us out and see what we have to offer as an upscale location near Tombstone.

This entry was posted 8 years ago on Wednesday, September 10th, 2014. and is filed under Events and Things To Do.