Apache Powder Company is the plant on the way to the b and b.

Apache Nitrogen viewed from the south side.

Apache Powder Road is the only sure way to reach Down By The River B and B. As guests travel this road, they will drive past a large manufacturing facility. The plant that they pass was founded in 1922 and was known as the Apache Powder Company. The company changed its name to Apache Nitrogen Products in 1990. Many of our guests have asked us what is manufactured at the Apache Nitrogen Products plant. We inform them that ammonium nitrate is produced there. This product is an excellent fertilizer but it is also an explosive used in mining operations in the region. 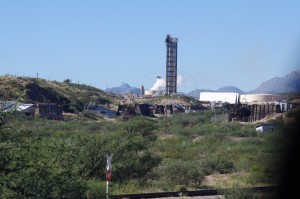 The Apache Nitrogen Plant looking from the east to the west. Many old buildings are still on the site.

I learned the history of the plant during a tour while I served on the Benson / San Pedro Valley Chamber of Commerce Board. Originally the plant produced dynamite. When a large deposit of nitrates was discovered in the area, the idea of a manufacturing facility for dynamite was inevitable. At that time the only source of explosives for the mines were manufactured in San Francisco or St. Louis. Transportation was done by the Southern Pacific Railroad into Benson. Today many of the older plant buildings are still standing and there has been talk of putting together an exhibit showing the history of the plant using items from the plant. Some of these items can be seen at the Benson Visitors Center. 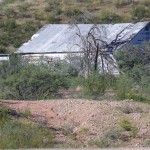 Many of the older buildings are still in use today at the plant facility.

The Apache Powder manufacturing facility became the main supplier of nitroglycerine explosives in the Southwestern US. After the first year of production, a million pounds of explosive was being produced every month. By 1956, the plant was manufacturing 41 million pounds of explosives a year. The operation was the main supplier for the mines located in the region. In 1983, the operation ended the production of nitroglycerine and exclusively processed ammonium nitrate, a much more stable product. The plant also produces nitric acid for mining and the ammonium nitrate is use in the agricultural industry.

The plant is the biggest private employer in St. David. Approximately 100 people work at the plant. The company is very civic minded and works with the community. At one time the plant provided housing for employees as part of their compensation package. The houses near the plant were torn down only foundations can still be seen. In 1949, the executive’s houses in Benson located around Apache park were sold. Now you have a little history of the Apache Powder Company’s 90 years of existence here in St. David.

This entry was posted 8 years ago on Tuesday, November 4th, 2014. and is filed under Down By The River FAQ.