Southeast Arizona B and B Theme Rooms 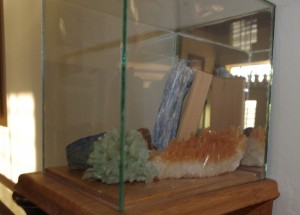 We have found and displayed different minerals in the prospector room.

Our Southeast Arizona b and b theme rooms continue with the prospector room. Southeast Arizona has its share of mining claims. Some locations here in Cochise County still have active mines. Silver and copper are the main ores but there is also gold to be found. There is still a chance that some luck cuss that knows what he is looking will find something. Now as for me, I could trip over a silver deposit and keep on walking.

We chose the prospector room as one of our Southeast Arizona b and b theme rooms because of all the mining that was done in the area. Tombstone is probably one of the more famous finds but it is not the only one. Bisbee had a large mining operation that was in 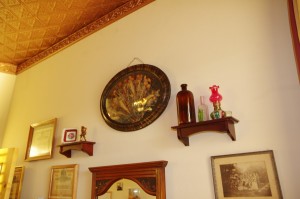 The walls of the prospector room have many things to see including old photos, maps, stock certificates and mining equipment.

use into the 1980s. The decorations for the room were gathered throughout the US and fit into the early 1900s era. Old maps of Arizona are on display. We also have Arizona mining stock certificates but found them in Florida because we couldn’t find them in Arizona. We have a canary cage that was used down in the mines. The canary was kept in the mine to warn miners if deadly gasses would build up. If the canary quit singing that was a sign of trouble.

Minerals and scales are also found in the room along with personal mining equipment such as carbide lamps, ladles and pots. Outside the room on the private patio are 2 mining buckets used to winch ore up the shaft from the bottom of the mine. There is also an antique vanity in the room that is equipped with side mirrors that would allow the woman to view herself from front or back. Along with the other turn of the century furniture we decided to have some unique end tables for the bed. One is an old icebox, pre-electric, and one is a 1920s radio cabinet.The room also has a real tin ceiling installed which is over 100 years old. 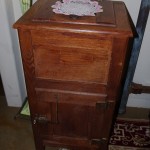 Before the refrigerator and electric power, ice boxes were used to preserve food. The ice would go on top and the food was stored below. 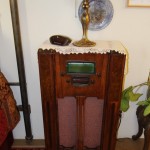 The old radio is used as a night stand on one side of the bed the ice box is on the other side.

Probably the one place that most or out guest laugh at is the bathroom. The bath has clothing hanging from the walls as if it were wash day. There is even an old washboard in the room along with some signs from mines that we found in Nevada. TSA didn’t like one of the signs in particular because it had traces of nitrates on it. It set off the alarms and our luggage was searched for bombs. The bath also has a copper basin sink that fits in perfectly with our Southeast Arizona b and b theme rooms. Click on our room page to find out more about the prospector room or use this link for a video. 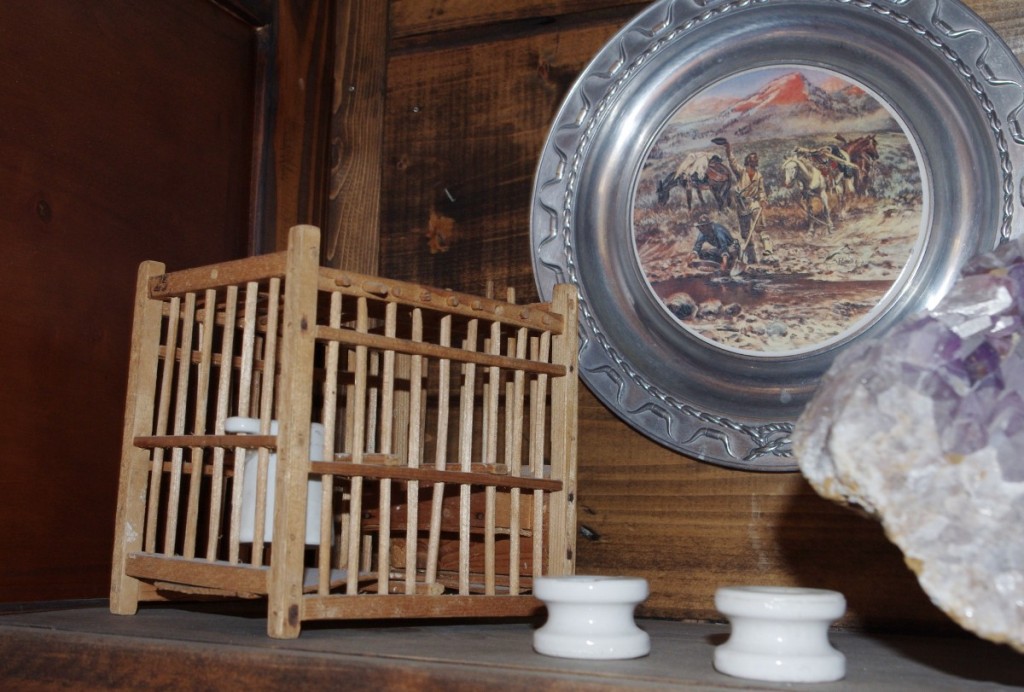 The bird cage was used in a mine. It housed a canary that would sing. If the canary quit singing and was lethargic the miners would know that gases were building up to dangerous levels.

This entry was posted 8 years ago on Thursday, December 4th, 2014. and is filed under Down By The River FAQ.