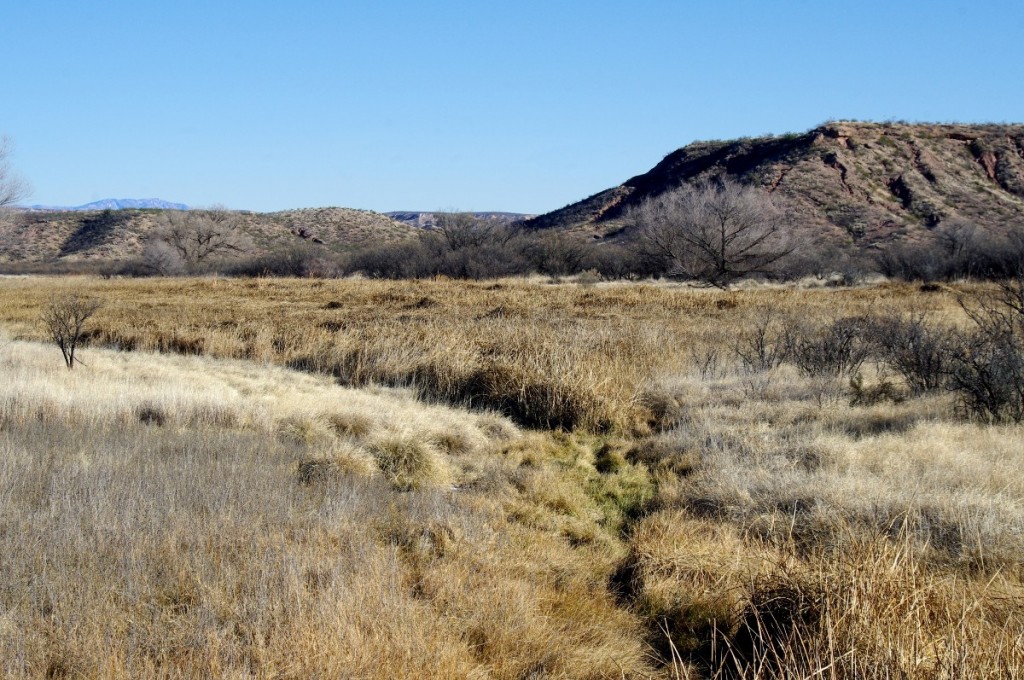 The Saint David Cienega is a remnant of what was once a large system of marshes located here along the San Pedro River.

The Saint David Cienega the way this area was before settlers 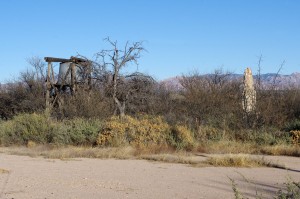 On the road into the preserve is an old house ruins.

Angie and I have had guests talk about the Saint David Cienega over the years. I have also had the pleasure of meeting Joe Billings, who works with the Monarch Study Project tagging Monarch Butterflies here in Southeastern Arizona. Joe was tagging some Monarchs as a part of a study during the monsoon season in 2009. He became stranded at the wash during a flash flood. He decided to find out what else was in the area and found the B and B. We sat around for an hour or so talking about his work with the Monarch Butterfly Study. Interestingly he has kept in touch with us over the years and sometimes stops by to say hello. We were free and decided to take a walk to the Saint David Cienega; just 3 miles from Down By The River b and b. You can drive there but walking allows you to spot things you would miss in a car. But before I go into too much detail about our experience, here is a little history about the cienega and this part of Southeastern Arizona.

The area around Saint David and Benson was once a lake bottom. Over time the bottom filled with clay. Click here to read about this from a previous blog. Because of the clay and rock, the water doesn’t drain away but forms ponds. The upwelling of water from many artesian springs and seeps in the area provide the moisture that keeps this area wet.  These conditions provide water to sustain the unique plant life in the desert. The desert can be harsh and you rarely find sedges, grasses, cattails and reeds growing in a wetland. Milk weed can also be found in the late summer and fall and is a big draw for Monarchs. 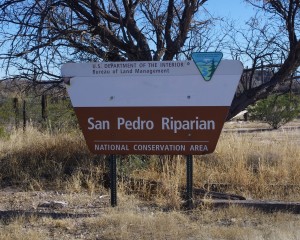 The San Pedro Riparian National Conservation Area is managed by the BLM.

The Saint David Cienega is one of the remnants of what was once a great system of marshes that were found along the San Pedro prior to the settlers coming into the valley in the 1800s. The area was home to many beavers which were hunted out by the late 1800s. The removal of beaver dams and draining of the wetlands for farming allowed the San Pedro River to flow through and create a channel where once large wetlands were. Land use for farming and grazing further reduced the wetlands into smaller marshes like the Saint David Cienega. As the river channel deepened the cienegas were cut off from the river and the water table dropped. The great cienega system dried up and only those areas that had springs survived in a reduced state. Because of the evaporation of the water the alkalinity of the marsh has increased. The plants that are in the Saint David Cienega are more salt tolerant that the adjacent flora so they can survive. You can find areas where the salts have built up and cover the plants and, having crystallized, giving a snow like appearance.

The San Pedro Riparian National Conservation Area was set aside by Congress to preserve this unique area in 1988. Check this link to read about it. The St. David Cienega is located within the SPRNCA and has been designated as a Research Natural Area. This further restricts the use of the cienega and is solely managed to keep human impact to a minimum. You can visit and walk into the area but are asked not to camp or leave any evidence of your visit.

Watch for our next post about what we saw when we went to the cienega.

This entry was posted 8 years ago on Tuesday, December 30th, 2014. and is filed under Nature.