The headwaters of the San Pedro River start in the foothill of the Sierra Madre Mountains 30 miles south of the US border in Mexico.

Today the San Pedro River is the major source of water sustaining the wildlife in Southeastern Arizona and Cochise County. In Arizona it is unusual to find a greenbelt as lush as you see along the San Pedro River. The river starts in the Sierra Manzanal as a spring about 30 miles south of the American border near the City of Cananea. The San Pedro River is about 140 miles long and flows north into the US terminating at the Gila River. Because of the water source provided by The San Pedro River, there are approximately 400 species of birds that can be found in the area at different times of the year. The San Pedro River Valley is one of the five best birding migration routes in the US.  To protect this valuable resource, The San Pedro National Riparian Conservation Area was set aside by The US Congress in 1988. The area covers nearly 57,000 acres and runs from the border to just south of our San Pedro River B & B in the town of Saint David, AZ.

The San Pedro is formed by a rift valley with mountain sky islands having peaks from 8,000 to 10,000 feet in elevation along the river valley. In the 1890s there was a seismic event, or earthquake, about 60 miles south of the border in Senora Mexico that actually changed the flow of the river. The area that is now the Town of St. David was once an ancient lake bed. During that time alluvial and clay deposits at the bottom of the lake gave St. David the artesian springs that add to the vitality of the area.  These ponds and streams flow continuously to supplement the water sources for animals in the area. The San Pedro River Valley has been home to people for at least 13,000 years. There are many Clovis sites along the river and the prehistoric peoples hunted mammoths and bison in the area. Some sites along the river valley have been excavated for artifacts. A map that is on the Friends of the San Pedro Website show the San Pedro River Riparian Area features. 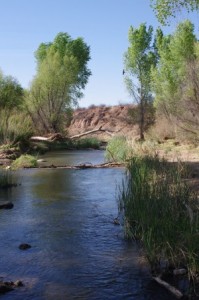 The Spanish first entered this area around 1539. Fray Marcos de Niza and his companion Esteban traveled in the San Pedro Valley in search of the Seven Cities of Cibola – The Cities of Gold. Coronado, believing the rumors, decided to lead an expedition up the San Pedro River Valley to the Gila one year later. He continued on to the Zuni Villages in New Mexico and probably ventured into present day Kansas before turning back without finding anything. There is a very interesting book written by Douglas Preston called the Lost Cities of Gold that traces Coronado’s route and recaps the contrast of the area found then and now. After Coronado failed, Father Kino worked his way up the Santa Cruz River Valley and established missions all the way to Tucson. In 1776, The Spanish started building The Presidio Santa Cruz de Terrenate along the western bank of the San Pedro River just north of where Highway 82 is today. Because of the Apache attacks and the tough life, the fort was abandoned in 1780.

Fur trappers lead by James Ohio Pattie followed the San Pedro River in the 1820s and called it the Beaver River because of all the beaver that were in the area. The beaver dammed the river and created swamps or cienegas which are permanently saturated wetlands. The beavers were trapped out over the years and beaver dams were dynamited to remove mosquitoes that caused malaria. With the removal of the dams, much of the river swamps and cienegas disappeared. Beavers were reintroduced around the San Pedro House in the 2000s.

In 1877, a year before the silver discovery in Tombstone, Saint David was founded by Mormon Settlers. Saint David has the distinction of being the oldest continuously inhabited community in Cochise County. There are many descendants of the original families still living in the area. After Tombstone was established, there were many towns that sprung up along the San Pedro River including Charleston, Contention and Fairbank, all of which are now ghost towns. Ranches were established along the San Pedro including the Clanton Ranch, and the Boquillas Ranch. There is a petroglyph trail that is located just north of Charleston Crossing on the San Pedro River. 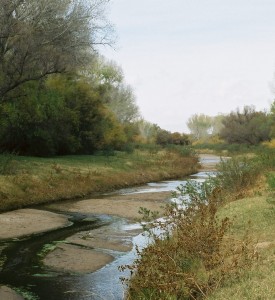 Our San Pedro River B&B is open all year and allows birders the luxury of lodging close to the San Pedro River. Birding in the area is good at all times of the year. During the spring and summer, flycatchers live off the insects that are found around the San Pedro. Tent caterpillars are found feeding on the leaves of the cottonwood trees that grow along the river. Harks, eagles and vultures are flying overhead during the day looking for prey or carrion. The area is home to as many as 84 species of mammals, 100 plus species of birds that make the valley their year-round home and numerous reptiles and amphibians. During the migration periods there are over 250 species of birds that use the San Pedro River as a flight corridor. Approximately 100 butterflies also migrate through the San Pedro Valley. We have seen raccoons, skunks, coatimundi, mule deer, white tail deer, javelina, grey fox, coyote, bobcats, squirrels and even a small bear. Neighbors have seen cougar many years ago. 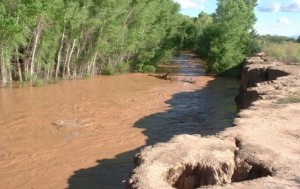 The San Pedro River flooding can be so strong that trees are uprooted and flow down the river during the monsoon season.

After non-Arizonans see the San Pedro River, some have told us that from where they come from this is only a creek or crick. Most of the year, the San Pedro is a quiet river without a large flow. In some places the San Pedro appears to disappear and people think that it dried up. That is not the case. The San Pedro goes underground in some areas but is still flowing. If you dig down a short depth in the river channel, you will find water. We built the Lodging Hub of Cochise County,  Down By The River BnB along the San Pedro, the river has never stopped flowing. In July and August, there are times that the river is flowing bank to bank and is at least 10 feet deep. During heavy monsoon storms the river can be heard roaring. In some cases even the washes are flowing and there is a roar that can also be heard from that direction.

Water is the life blood of the desert and supports the animals that live within the area. We do have people that come to this part of Arizona just to see the monsoons and to photograph the lightning storms. If you would like to have a little adventure and experience vivid sunsets after watching and hearing a Southeastern Arizona afternoon thunderstorm, then come on down to Saint David in July and August. With a little luck you might even be blessed to see a double rainbow. They do happen here and we have the wide open spaces to take it all in. We are at 3800 feet in elevation, generally 20 degrees cooler than Phoenix and a lot wetter. The smell of the desert when the rains come is something that I have always loved. You can experience all of this when you stay at Down By The River and watch an Arizona rain storm during the summer. 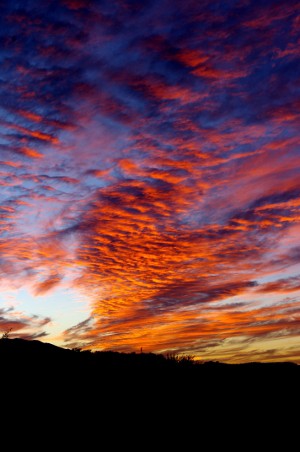 A monsoon sunset in Southeastern Arizona can be spectacular. 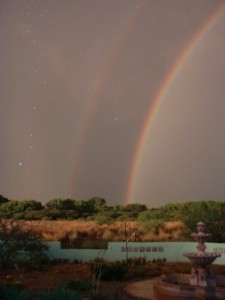 A double rainbow is on display during a monsoon storm just at sunset.

This entry was posted 9 years ago on Wednesday, May 15th, 2013. and is filed under Down By The River FAQ, Nature.