Posts Tagged ‘b and b st. david’ 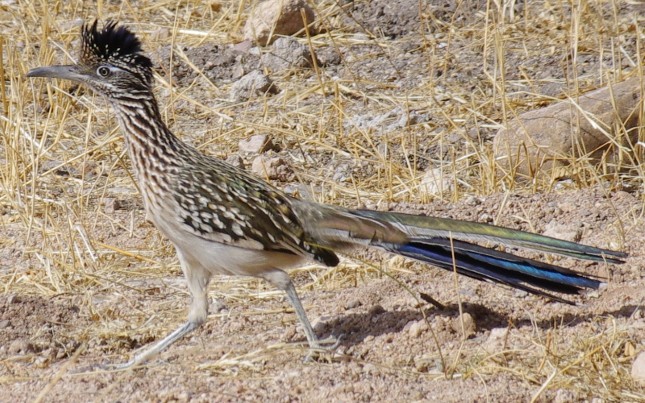 The Greater Roadrunner sometime follows me to see what I scare up for dinner while I am walking through the brush. 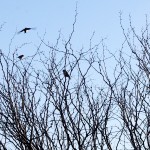 As the Greater Roadrunner came out from behind the bush the birds all took flight into the top branches of the tree.

The Greater Roadrunner is a member of the cuckoo family and inhabits the northern Mexico and most of the Southwestern US. The Roadrunner ranges into Texas and up into Kansas. There is a lesser Roadrunner that lives in on the western Mexico mainland coast and down into Central America. It’s similar looking but smaller in size and their range overlaps slightly in northern Mexico with the Greater Roadrunner. Here is Southeastern Arizona, Roadrunners can be found in the many areas of Cochise County but especially near the San Pedro River. While driving on the roads you may see one dart across the road in front of the car. Very seldom will you see a Roadrunner leave the ground in flight. They will take flight in times of danger but prefers running on the ground.

Growing up we always watched the Roadrunner Coyote cartoons. It was always fun to see the coyote being bested by the Roadrunner. From those cartoons there was never any doubt in my mind that the Roadrunner ate seeds and could outrun a coyote. Alas the cartoon was a false image of true life. Coyotes are twice as fast as a Roadrunner and can easily catch them in an even race. As for the Roadrunners, their bill of fare of seeds are only about 10% of their diet. 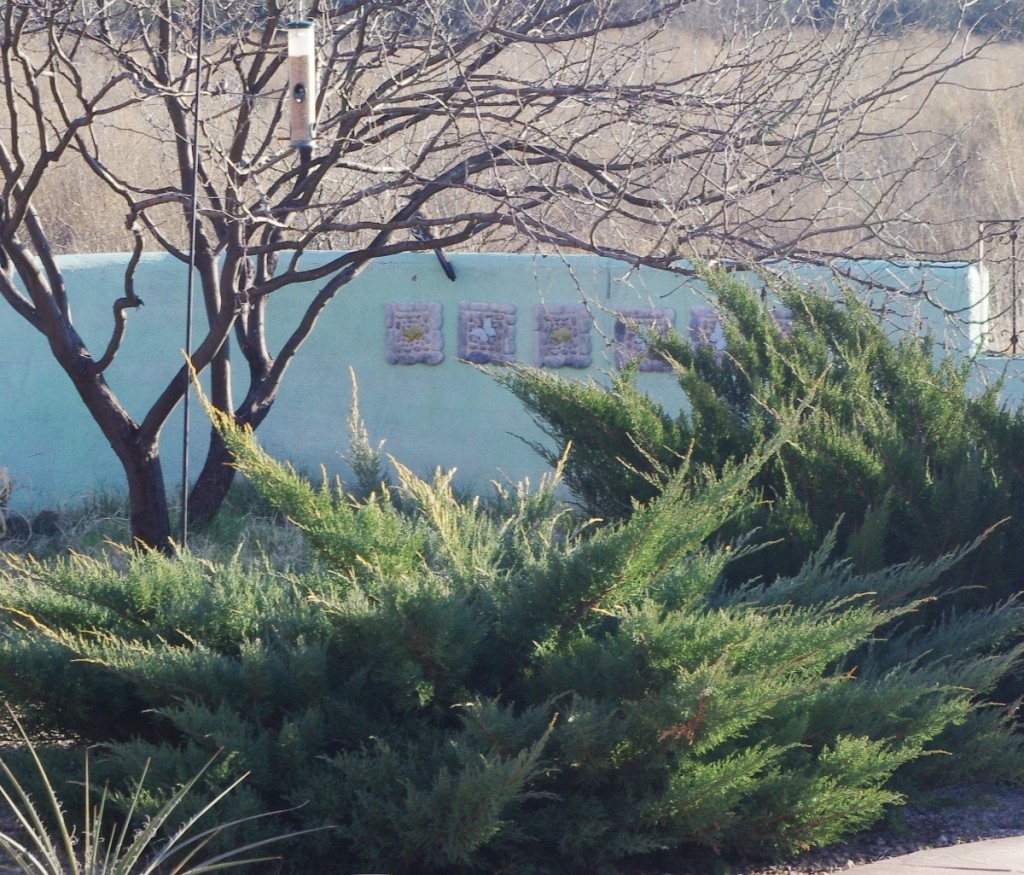 After the birds flew into the tree the Greater Roadrunner jumped up on the wall to see if it was possible to get to the birds.

Roadrunners mainly eat insects, smaller birds, reptiles including snakes and lizards and smaller rodents. In the desert environment the live food provides the bulk of the water that the Roadrunner requires. The Greater Roadrunner is quick enough to snatch hummingbirds and dragonflies out of the air if they come too close. We have watched Roadrunners running through the breezeway with snakes and lizards in the beak. The Roadrunner is a clever bird. For example while hunting for prey such as rattlesnakes, they will team up with another Roadrunner. One will distract the snake the other will move up from behind to ambush and grab the snake at the back of the head. It will then beat the snake on a rock to kill it.

The other day we watched a Roadrunner hop over the patio fence and move slowly using the cover of the planters and furniture. It moved into bushes until it was close to the seed feeders. The birds were on the ground and all foraging for seeds that had fallen from the feeders. It wasn’t too long when the birds all took flight leaving the Roadrunner alone on the ground. The Roadrunner jumped up on the patio wall and surveyed the tree where the birds had flown to the top branches. Soon the birds flew off to other areas and the Roadrunner hopped down and started looking again for food. It was really interesting to watch the drama play out. I have also had the Greater Roadrunner follow me as I went to the well house. He stayed back a little waiting for me to scare up a lizard or bird. If I did he would dart out and grab it then go off to feed. 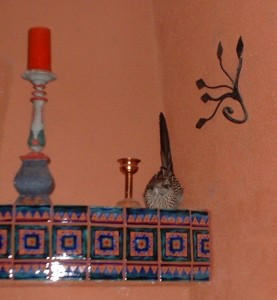 The Roadrunner roosting at Down By The River a Cochise County Birding Hotspot.

We have had the Greater Roadrunner roost for the night on the breezeway fireplace and on a beam near the ceiling of the breezeway. It took us a while to figure out what the bird did to get 8 feet up onto those roosts. That is when we found out that the Roadrunner could fly if need be. He flew up to the mantle from the furniture then to the beam from the mantle. By early in the morning he would launch himself off the beam and glide down to the floor. Then the bird would head out to find breakfast and to start a new day. This is a fascinating bird to watch. So if you want a good chance to see the Greater Roadrunner here in Southeastern Arizona, spend some time at Down By The River B and B here in St. David, AZ. 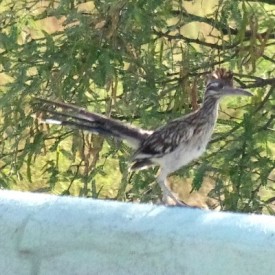