Directions to the Fort:

From Down By The River B and B, the access to Fort Bowie for most people is best accomplished by heading east on Interstate 10 and exiting in either Willcox or Bowie, Arizona.

From the town of Willcox, drive southeast for 20 miles on State Road #186 to the Fort Bowie turn off, then drive another eight miles on the unpaved road to the Fort Bowie Trailhead.
From the town of Bowie, take Apache Pass Road 13 miles south and then about 1 mile of unpaved road to the trailhead. There is access for handicap persons from a service road to the monument but you have to make prior arrangements to use this parking area.

History of the Fort:

The Government awarded the Butterfield Overland Mail Company a six year contract to deliver mail between St. Louis and San Francisco on September 16, 1857.  The mail was delivered over the southern route and one of the stations along the route was located in Apache Pass near the site where Fort Bowie would be built. This site was selected because of the reliability of water at Apache Springs. The army maintained a presence in the area to protect the stage line and to keep the general peace. The Apache generally didn’t bother the stage line at the onset of passage through the area.

The first major engagement with the Chiricahua Apaches is known as the Bascom Affair. This was precipitated in January 1861 when a band of Apaches raided the ranch of John Ward, stealing livestock and his adopted son. Ward claimed that Cochise, the Chief of the Chiricahua Apaches was responsible for the raid and demanded that the army take action to recover his son and his property. In February, the army sent an inexperienced Lieutenant George Bascom and fifty-four men to Apache Pass to find Cochise. Cochise came to show the Chiricahua were innocent of the raid. He came with his wife, sons, brother and 2 other relatives to meet Bascom at the army camp in the area of the stage station. Bascom invited Cochise and his brother to meet with him in his tent while the others were sent to another tent. The tents were surrounded by the army personnel and after questioning Bascom threatened to hold them hostage until Ward’s property was returned. Then Cochise and his brother, using their knives, cut through the tent and fled the camp. Cochise escaped but his brother and family were captured and held. Over the next few days Cochise captured two of the station personnel and then three more teamsters from a wagon train while killing another 8.  Bascom in response hung the hostages that he held. Sporadic fighting between Cochise’s warriors and Army troops would continue for years to come.

The second major engagement was the Battle of Apache Pass, fought over 2 days in mid July, 1862. A Union regiment was marching to New Mexico from California when they were ambushed by a band of Apaches. Because of this battle, the military decided to establish Fort Bowie to protect Apache Pass and Apache Spring, the source of water in the area. 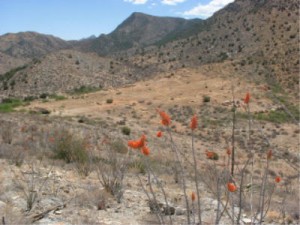 buildings constructed it was more of a temporary camp. However, in 1868, a second larger and more permanent fort was built to the southeast of the original site. The fort was abandoned in 1894 but for over 30 years the area was the main location for the military operations against the Apache and ended with the surrender of Geronimo in 1886. The Fort was decommissioned in 1894 and in 1911, the land around the fort site was sold off and the building materials were scavenged. In 1964, Fort Bowie was declared a National Historic Landmark.

The trail to the Fort:

The foot trail to the ruins of Fort Bowie and the visitor center is about 3 miles round trip that begins at a parking area along Apache Pass Road. The trailhead has restrooms and a picnic area for visitors. There are no other restrooms until you get to the visitors center. Take water with you on the trip since there isn’t any water until you reach the visitors center. The trail starts at about 4700 ft elevation and is not strenuous. The Fort is located at about 5000 ft elevation. If you continue to take the loop trail and do not return on the same trail, there is a climb of a little over 100 ft in elevation up the ridge of the hill behind the fort. This part of the trail gives you a great overlook of the Fort and also takes you back to the main trail by a different route.

The trail to the old fort passes many other interesting and historical sites and exhibits along the way. There is a sign at each location that explains the significance of the site. At the Fort, the signs have pictures of the building along with the description so that you can see what it looked like before all the buildings were taken down. The hike is stimulating if you let your mind wander. Imagine being in the area on patrol with members of your squad returning from a search for Geronimo. The trail goes through arroyos, skirts hills and large rocky areas and runs at times by a tree lined wash. There is brush that will hide a man with ease and you never know if there is an Apache warrior behind any of the places I just wrote about. You can easily understand what it was like to be isolated in this location with the nearest help being a hundred miles away. The officers and men that lived here were not the faint of heart. 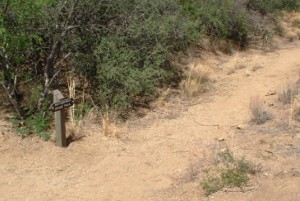 Stop. The first time I saw this I was somewhat perplexed. The road was only about 4 or 5 feet wide and I wondered why it wasn’t wider. I was thinking of the stage coach in Tombstone and the old Hollywood Westerns. I don’t know what I expected. It may have been one of the first roads from east to west but this sure didn’t remind me of the Interstate that I had left 30 minutes before. In fact I have been on trails wider than this at the some of the National Parks. I found out later that the stages were smaller than what is normally seen in the western towns now days.  It is fascinating to linger around the area to view the stage stop and imagine the station master and the isolation that he experienced every day.

Further on is a military graveyard with many markers. These include a marker for Geronimo’s 2 year old son, who is buried there along with another young Indian girl. A little further along you come to the ruins of the Chiricahua Apache Indian Agency. This was the office of Tom Jeffords, the only white man that Cochise would trust. You might remember the old 1956 TV Series of Broken Arrow with John Lupton and Michael Ansara, who 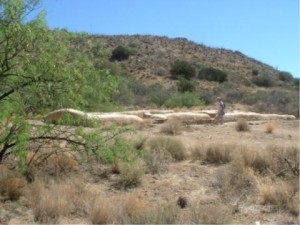 The Ruins of The Jeffords Indian Agency

played the parts of Jeffords and Cochise respectively. You can walk around the area and know that you crossed over the tracks of Cochise and Jeffords and other famous Apache warriors including maybe Geronimo. The trail goes on again to a replica

Wikiup made as a display

of an Apache wickiup. The wickiup was used as the primary shelter for the Apache and was made of wood boughs and other materials.

As you start to ascend to the plateau where the fort is situated the trail goes up a tree lined canyon to Apache Springs. The spring is still running and looks refreshing. Even though the early travelers to this part of Arizona drank the water at the 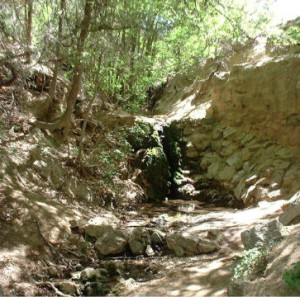 The running water of Apache Springs

springs, don’t do it now. This is a nice area to rest in the shade during the warmer season. The trail continues up the canyon and then comes out on the plateau. The original fort is on a trail that cuts off to the right while the trail straight ahead takes you to the larger fort ruins and finally the visitor center.

Tour the fort grounds and look at the various building sites. This fort is nothing like what is you see in the Hollywood movies. There were no stockades with soldiers patrolling the ramparts. In fact, the fort is spread out over a large area with many buildings. The armory is located away from the main buildings and is not in close proximity to the main fort. This was interesting to me that this would be further away. It made sense after I thought about it since it did contain explosives. Throughout the fort, the ruins have plaques that explain what you are looking at and also show a picture of what the buildings looked like. The commanding officer’s Victorian house was quite elaborate and was constructed at one end of the parade ground at a cost about $5000. That was a large sum of money in the late 1800s. The visitor center contains an exhibit of items, including clothing, that were used at the fort and also has a lot of information on Fort Bowie’s history. There are a variety of books on the Indian Wars and life in early Arizona available for purchase. The park rangers are well versed on The Fort and the history of the area.

Allow yourself a couple of hours at a minimum to enjoy the trail and exhibits. It is a quiet area with many birds and other wildlife and you can imagine for a moment what it was like in the old west before the Apache finally surrendered to the army. Fort Bowie National Historic Site is open year round 8:00 am to 5:00 pm daily except Christmas Day.

This entry was posted 12 years ago on Thursday, February 10th, 2011. and is filed under Events and Things To Do, Outdoor Recreation.