Arizona is celebrating the centennial of admission as the 48th State in the Union on February 14, 1912. Arizona official centennial events run for many months and at many different locations in the state. Events can be found on the official website.

New events are being added to the calendar so check back to find out when events are happening and where. There is also a section of fun facts that give you trivia about the state. Some facts are “ All of New England and Pennsylvania would fit inside of Arizona.” and “Arizona is the 6th largest State in the Union having 26 peaks that are over 10,000 feet in elevation.” No Arizona is not just flat with nothing but sand and cactus. In fact as you travel either north or east from Phoenix you actually gain elevation and find some of these peaks.

For a little background history, the New Mexico Territory was established in 1853 and at that time the territory consisted of New Mexico and Arizona. The territory also included the southern part of Nevada. When Nevada became a state during the Civil War this section west of the Colorado River became a part of Nevada. On March 16, 1861, the southern New Mexico Territory around Mesilla and Tucson declared themselves independent from the United States and joined the Confederacy. The Confederacy considered the territory a vital link to the Pacific and would have allowed the Confederates to trade with the rest of the world. This would have caused the Union logistical problems with blockading ports. Additionally around 1860, Southern California was close to becoming a separate territory apart from the State of California. That never happened even though the area was sympathic to the Confederate cause.

On April 15, 1862, the Battle of Picacho Pass was fought in between Tucson and Phoenix, near the present day  town of Picacho. The Civil War battle was the furthest west of any battle and is reenacted yearly. The Confederates were driven back to New Mexico by California Volunteers and later withdrew back to Texas. In 1863, the U.S. split up the New Mexico Territory and created the Arizona Territory, which was to become the state of Arizona.

Arizona became known for mining, cattle and railroads. These components became the centerpiece of Arizona Territory economy. In 1877, The Desert Land Act gave settlers 640 acres of land and led to a growth in population. During that time there was many conflicts with the Apaches that were finally ended with the capture of Geronimo. Things settle down and the population grew. Arizona became know for the 5  C’s – copper, cattle, citrus, cotton and climate.

In the early 20th century the Congress looked at combining Arizona and New Mexico and making it one state.  Most of the people in New Mexico agreed with the plan but it was not accepted by most Arizonans. Arizonans wanted to be a separate state and worked for almost 30 years to get Congress to allow them to form a state. It wasn’t until 1910 that Congress voted to give the Territory approval to write a constitution. In 1911, Arizona submitted the state constitution to Congress. It included the use of initiatives, referendums, recall, direct election of senators, woman suffrage, and other reforms. Although, most of these proposals were accepted by Congress, President Taft insisted on removing the recall provision before he would approve it. He didn’t like the recall because it could be used to remove  judges. The State removed it and then President Taft signed the statehood bill on February 14, 1912. After Arizona became a state, the Legislature put the recall back on the ballot and the voters promptly approved it making it a part of the State Constitution. 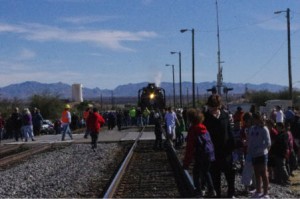 To help celebrate the Centennial, the Union Pacific toured the state with the last steam locomotive built for Union Pacific in 1944. It made a 30 minute stop in Benson and was greeted by a large crowd. Click on the video link at the end of this blog to watch the train leave Benson on it’s way to Tucson where it was placed on exhibit for a couple of days.  No. 844 was almost scrapped in 1960 but was retained for special services. It made special runs to various events here in the US before 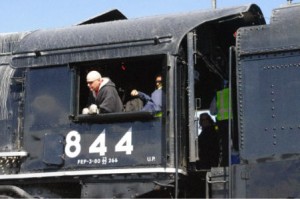 The engineer manning the steam engine UP 844

being retired in 2000. It returned to service in 2005 after a 5-year overhaul of its running gear, pumps, pipes, valves, springs, fire box and cab interior. The locomotive and tender weights 908,000 pounds when fully fueled. While talking with one of the UP conductors, he told us that this was a very expensive train to operate compared with the diesel electric trains now in use. The higher cost is that this steam locomotive used #5 oil to superheat the boiler to about 300 degrees. The locomotive is based in Wyoming. 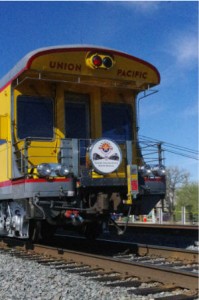 This entry was posted 11 years ago on Monday, November 21st, 2011. and is filed under Events and Things To Do.