There were many films shot in the Tucson and Benson areas back in the 1950s and 60s. A John Wayne movie was shot in St. David, not too far from where Down By The River B and B is located. Even today there are movies shot in

The Main Street in Gammons Gulch

Mescal at Tucson Movie Studios. We want to let you know about a little jewel known as Gammons Gulch. This is a movie set that is located between Pomerene and Cascabel, northeast of Benson and surrounded by arroyos and beautiful mountain vistas. Down By The River B and B, the lodging hub of Cochise County, gives you access to this intriguing location with a short drive of about 24 miles along the picturesque San Pedro River.

At the beginning of December, we wandered out to Gammons Gulch with some family to visit the old movie studio set. They had never been to Arizona and so 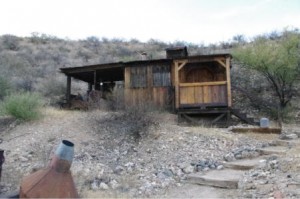 we thought that it would be a treat for them to see what a movie studio looked like.  I had been there once before to see what Jay Gammons had to offer in order to tell our guests what they could expect. It had been about six years since we had been there and the additions that had taken place during that time were evident. There is a saloon erected on the site now, albeit it is a dry bar. This was added by a movie company that was filming a movie about 2 rival saloons in a town. They built the saloon in a few days and when they finished their work, they left it there. There is even an old mine that is back in a canyon across a wash. 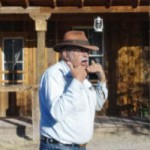 Jay emphasizes the features of the movie set and gives you a story on the tour.

Jay is a wonderful docent. He has stories about when his dad worked in the movies and also told us that he himself had worked in movies. One movie he noted was with John Wayne (we’ll let him tell you which one). He told us that the Duke was a real gentleman and to show you he means it, he has a picture of himself with the Duke as a young boy.

Jay decided to develop his studio to give a view of what happens behind the scenes to those interested in films and to share his passion. Typically, smaller productions use his studio and this is a niche that Jay has built in the movie market. Jay has also had his props used in movies, one of which is Tombstone. As you’re touring the studio with Jay, he points out the pictures of different props and tells you a related story about how it was used in a film.

The best part of the whole experience is Jay. The man is so enthusiastic and he knows so many stories that you sit there in wonder. Before you know it he has shown you everything and it is an hour later. The studio can be used for old westerns or it can be used for films that are cast in the early 1900s. The town site includes a telegraph office, saloon, gallows, black smith shop, old garage, a church (where they will hold weddings), old mine shafts and mining equipment to name a few things. 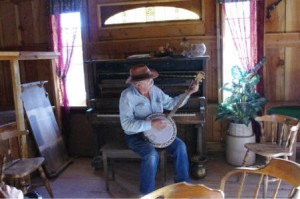 Jay plays the banjo at the piano during a break on the tour.

You’ll see that the time flies by as Jay takes you around and tells you his stories. He even sits in the saloon plays the piano and banjo for you. There are many antiques and all of them have a story. So if you want to go see a movie studio without a lot of restrictions, then Gammons Gulch is the place to go. Jay’s repertoire is worth its weight in gold. Take a look at his website and you will find directions and just what to expect. We let our guests know about Gammons Gulch and they have all come back to tell us that it was really a neat experience.

This entry was posted 11 years ago on Thursday, December 22nd, 2011. and is filed under Events and Things To Do, Outdoor Recreation.