What is that wind sock for across the road?

There are a lot of unusual things and interesting people that are found in Cochise County. We have famous people, people that provide optics to the military and NASA, people that are cowboy poets and story tellers, a doctor that specializes in immunity problems such as when molds infect the body, visionaries that want to protect the environment, people that are authors and I could go on with more examples. We also have people who have different occupations that they are good at doing. I wrote about one person, Wezil, who has spent his whole adult life doing bird tours for clients. There are also people who have hobbies that aren’t the normal ones.

One of the questions that I have gotten when I talk to guests is “What is that windsock for? Is there a landing strip over there on the other side of the road?” Well as a matter of fact, there are two landing strips here at DMR Ranch where Down By The River, a San Pedro River B and B, is located. Chester is one of the first people that we met when Barb and I came down here and decided to build our b&b. He is a first class heavy equipment operator and did all the excavation on the property when we built this southeastern Arizona b&b. Chester also has an airstrip on the other side of Efken which he uses for his hobby. 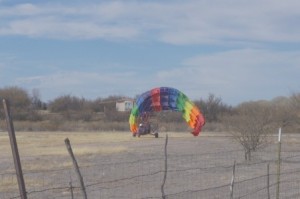 The fan from the paraplane inflates the chute prior to taking flight.

Chester has flown off the landing strip many times since we have been here. He operates less now than when we moved into the b and b in 2005. This is mainly due to the cost of fuel. Every once in a while when the weather is nice and calm, he goes out, checks the strip for holes and rocks and then preps his paraplane for flight. He is able to fly for an hour or so and then returns home.

An explanation of Chester’s wonderful flying machine is in order here. Paraplanes were developed in the early 1980s. The paraplane is made of two main parts. One is the specially designed parachute that gives the plane lift and the other part is the framework that is the seat for the pilot and supports the motor and fan that powers the plane. The frame can be best explained as something you would use in a swamp with the big fan at the back. The only difference is that this frame has wheels instead of floatation devices. 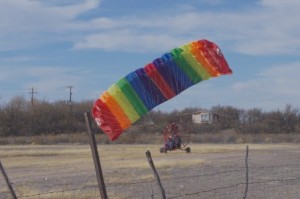 The paraplane take off can be done in a relatively short distance.

The parachute is laid out on the ground behind the fan in a specific manner. After starting the engine, the fan blows air at the parachute and the chute lifts off the ground into the air. Letting off the brake the frame moves forward and the chute rises further. It takes approximately 50 feet to become airborne and after a couple of circles around the field the plane has reached enough height to pass over the power lines and surrounding hills. The paraplane is steered by leaning left or right to make turns. To gain height you increase the fan speed or reduce the speed if you want to lose elevation and land. 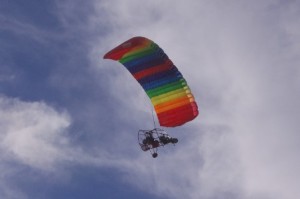 Paraplane in flight over our B and B

When Chester flies, it is usually on a Sunday morning when there is no wind. We have had guests watch him take off after breakfast. The last time he flew, I got my camera and took pictures of him taking off. His paraplane has a colorful chute and I am sure that this helps other planes see him as he is flying. It is fun to watch him leave but I think that having my two feet on the ground works just as well for me. If I fly, I like fixed wing aircraft since it gives me a greater sense of security. But that is just me. If you are lucky when you come on your visit to Down By The River, you will have a glimpse of Chester as he takes off or lands.

This entry was posted 10 years ago on Wednesday, March 6th, 2013. and is filed under Down By The River FAQ.