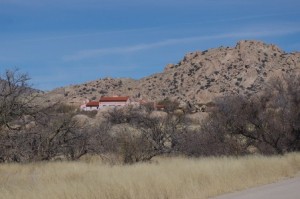 The Amerind Foundation is sited in Texas Canyon amongst the rocks

Located in Cochise County, Texas Canyon is a scenic granite outcrop made up of a jumble of boulders and rock. The area that was caused by volcanic activity millions of years ago. It never reached through the surface of the earth and the surrounding ground has eventually worn down over time to expose the rock formations. I wrote a blog on the history of Texas Canyon a little while ago. In Texas Canyon there is a museum that is a unique experience for travelers to Cochise County. This museum is called the Amerind Foundation Museum and it celebrated the 75th Anniversary of its founding in October of 1937. Amerind is derived from combining the two words American Indian. 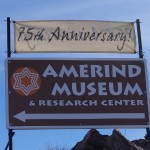 Sign on Dragoon highway point the way to the Amerind

William Shirley Fulton was the founder of the Amerind. He born and raised in Connecticut. He was interested in archaeology and started to come to Arizona in 1906, prior to Arizona becoming a state in 1912. He visited many places in the state including the Hopi and Navaho reservations. He was particularly interested in the Southwest Native American cultures and collected many items of interest. During one of his trips he heard about Texas Canyon and the supposed prehistoric artifacts that could be found. While in Cochise County in 1930 he purchased the property that now is home to the Amerind Museum. He started searching the property for artifacts and did archaeological digs on parts of his ranch. He became more focused and honed his skills, he published accounts for eastern museums telling about what he found at the sites.

After founding The Amerind and incorporating, he hired an archaeologist and started to support research on a larger scale. His efforts produced one of the finest privately held collections in the United States. Over the years since it’s founding, The Amerind has grown 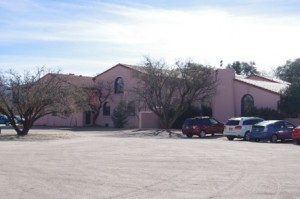 from just a house to a museum of Native American artifacts, a research facility, library, art gallery, storage facility and gift shop. In 1952 Charles Di Peso was hired as the first Director of the Amerind. His tenure lasted 30 years until his death and he expanded the focus of the foundation to include excavations in other parts of Arizona, New Mexico and Northern Mexico. Di Peso was instrumental in doing the excavation at Casa Grandes in Chihuahau, Mexico and excavated the large village. Prior to that, archaeological work in Mexico was done further south and concerned the Aztecs, Olmecs and Mayan civilizations. Northern Mexico was not thought to be worth studying.  He published eight books on the excavation and that is the leading work in the field even to this date. Displays of this work are on display at the museum. 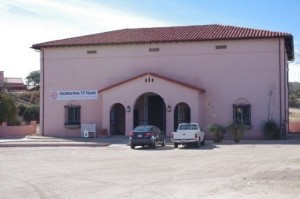 The Amerind Art Museum is housed in this building

Since Di Peso’s death in 1982, The Amerind became less involved in archaeological excavations. The focus is now on the research and providing multiple seminars and discussion groups for various topics and the preservation of the artifacts at the museum. Prior to 1985 the museum was only opened by appointment to visitors. The museum houses exhibits gathered from Alaska to the plains, the Southwest and also to locations in South America including Ecuador and Peru. The displays tell you the story of the artifacts and something of what life was like at that time. Allow a couple of hours to tour the museum and read the interpretive exhibits. The museum houses an the estimated 21,000 artifacts. 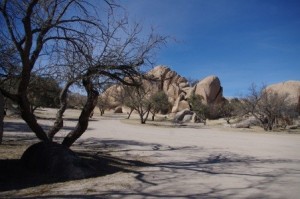 The museum has picnic facilities on the grounds for use by guests. 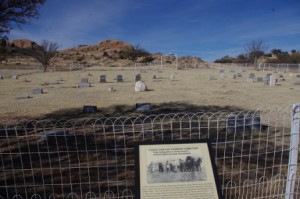 The Amerind Museum is open to the public from 10 AM to 4 PM every day except Monday. Special events and exhibits are held year round at the museum. Check out Down By The River’s events page to see the things that are happening during the upcoming months at locations near the b&b. The grounds of the ranch have picnic areas and also include the site for the Texas Canyon Pioneer Cemetery of the original Texas Canyon Settlers. The rocky scenery of Texas Canyon accents the museum building and the surrounding area. Hiking around the grounds will lead you to fun and discovery. Down By The River B and B is a perfect location to stay at when you visit Amerind. The San Pedro River BnB is centrally located to many of Cochise Counties attractions. To get to the Amerind take I – 10 east to Exit 318 and head south on Dragoon Highway about a mile and you will see the sign at the entrance. The road to the museum is on the left.

This entry was posted 10 years ago on Friday, March 1st, 2013. and is filed under Events and Things To Do.