Since our bnb is on the San Pedro River at the northern end of the San Pedro National Riparian Conservaiton Area, we have many birding guests at Down By The River B and B. They will relate to us what they found and the locations that they have been at during their trip. A recent guest couple told us about their experience with a “Wonderful Birding  Tour Guide” that they had met when they first came to Cochise County to stay on a birding vacation. They told us of a couple of tours that he was their guide and escort. They raved about how he was able to take them to just the right areas and finding the birds that they had hoped to see on their trip to Cochise County, Arizona. With their rave review of the tour with their guide, we asked for his name and contact information. Since we are in a centralized location for Cochise County, we felt that learning about the guide might be a great benefit to our birder guests. We made an effort to contact Wezil and set up a time to meet and talk with him.

Angie and I finally were able to meet with Wezil Walraven on February 19th when he stopped on his way home to New Mexico after spending time in Southeastern Arizona doing tours. Wezil told us that he is of Dutch decent and his name is pronounced like the animal, weasel although in Dutch it is Vesil. He told us that he had been doing birding for almost 40 years and really enjoys working with his clients. He told us that he was more of a teacher than a guide. He wants to be able to give them some guidelines to use when they are on their own. He also told us that he likes to have fun birding and related some stories about things that he has done. 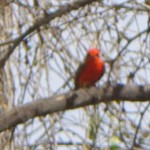 Vermillion Flycatchers are found in the San Pedro River area and on the property of Down By The River B and B in St.. David.

Wezil is a senior tour guide for High Lonesome Bird Tours. He told us that he has gone all over doing tours but tends to stay in Southeastern Arizona and his home state of New Mexico. When he isn’t doing the High Lonesome tours he does his own tours under the name of Wezil Walraven Bird Tours. When he does a High Lonesome tour in this part of Arizona, he also can set up a reservation for private tours before and after High Lonesome tour before he returns back home to New Mexico. He told us that he has acquired a good knowledge of birds, their songs and behavior as well as knowledge of their habitat. He demonstrated some of the songs and gave us some insight on what we could find out the back door of our BnB on the San Pedro River.

To that end he talked about our area here at the Northern End of the San Pedro River National Riparian Conservation Area. He was telling us that there are Gray Hawks and Western Screech Owls along the river in this area. He also confirmed that we had probably seen Golden Eagles last year and the Mississippi Kite in early February. He said that the Mississippi Kite used to be in the Winkleman area and had migrated down into this area maybe 10 years ago. He said that this is one of the unique locations for finding this bird and the Gray Hawks. As we talked, he told us that March through May are good birding months in this part of the state. But he went on to state that June is very good too. That is because the birds are nesting and they stay close and are therefore easier to spot.

Wezil can be contacted through his website, email wezil@wezilwalravenbirdtours.com or phone him at 828-575-3107 to set up a tour reservation. Angie and I believe that you will be pleased with your experience with Wezil.

This entry was posted 10 years ago on Wednesday, February 20th, 2013. and is filed under Down By The River FAQ, Events and Things To Do, Nature, Outdoor Recreation.