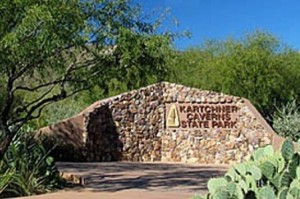 Kartchner Caverns State Park is the most pristine live cave in the United States.

Kartchner Caverns State Park is probably the best preserved living cave in the United States. No one has set foot on approximately 85% of the cave floor. It is located south of Benson on State Route 90. I recently wrote a blog on the Good Enough Mine Tour. In that blog, I mentioned that there are 3 underground adventures in Cochise County and Kartchner Caverns was one of these. When we started our Southeastern Arizona B & B, Kartchner had only been opened 5 ½ years. This is one of the best things to see in Cochise County but I am surprised that so many people in Arizona have never heard about it. The tours are limited to about 750 people per day and reservations are recommended although they hold back 100 tickets for walk-ins. There are 2 tours of the caverns. One is the Rotunda/Throne Room Tour featuring a massive 58 foot tall stone flow column called Kubla Khan and the second is the Big Room Tour featuring different types of calcite features and formations. Both take about 1 ½  hours to complete and both tours are totally different. You can do both tours in a day but you can only do the Big room Tour from October 15 until April 15. The Big Room closes due to the approximate 1500 bats that nests there during the spring and summer months.

The history of the cave goes back to 1974 when it was first discovered by two spelunkers, Gary Tenen and Randy Tufts. They were exploring the limestone cliffs of the Whetstone Mountains and found a sink hole with a crack in the earth that led into the cave. They kept their find a secret while exploring the cave over the next 4 years. Then in 1978, they informed the Kartchner Family of their find. They went on to explain how extraordinary the cave was and that there was a need to preserve the exceptional colors and formations. They all agreed to keep the find a secret.

Over the next 10 years, the Kartchner family, Tufts and Tenen worked at coming up with a way to preserve the caverns privately while still keeping the location a secret. If the cavern’s existence had become known to outsiders, it would have been vandalized. Finally the Kartchners approached the State of Arizona Parks Department for help. After the group approached the State they worked with people in the Parks Department along with Governor Babbitt to sell the caverns to the State. The immediate problem for the successful transaction was how do you spend public money and still keep thet secret at the same time. A way was found and the State Legislators and Senators were shown pictures of the caverns in closed session. The legislation to purchase the complex was passed by both houses on the same day and sent to Governor Rose Mofford to sign. On April 29, 1988 the bill was signed into law. That will be 25 years ago next week.

Over the next 11 years, the Parks Department planned how to provide for the toursists while still preserving and maintaining the integrity of the caverns. The Parks Department determined that building a multi-door air lock chamber to seal the humid caverns from the effects of the dry desert air and providing a misting system was necessary for the preservation of the cave. Mining professionals were brought in to excavate the passage though the solid rock that shielded the caverns. The Center was built, paths were made, railings were put up, seating and lighting were installed and a means to wash down the cave at the end of every day was devised. Finally on November 5, 1999 the Rotunda/Throne Room Tour was opened to the public. On November 11, 2003, the Big Room Tour was dedicated. Unfortunately Randy Tufts had passed away in 2002 and wasn’t able to see the Big Room open to the public.

A video has been produced by the Parks Department that shows you some of the special things you will see when you do the tour. Reservations for the tour can be made at this link. I also found a photo gallery online that has pictures of some of the things you will find in the caverns. The Cavern has shields, soda straws over 21 feet long, stalactites, stalagmites, and helictites, formations that defy gravity. There are features such as bacon and fried eggs; looking at them will make you hungry unless you have had one of BnB breakfasts.

The Discovery Center houses the museum, a gift shop, a restaurant and a movie theater that show a short film about the discovery of the caverns. It lasts about 15 minutes and is something you will want to see if you have never visited before. The museum has the bones of an 86,000 year old ground sloth that was found in the cave. You can’t take photographs on the tour nor can you carry purses, backpacks, fanny packs, food, water, nor other items. Check with the park website for other restriction. For those of you that bring a picnic lunch there are picnic areas and shelters for you to have that lunch.

There are two trail heads at the park for those that want to hike. One is the 4.2 mile Guindani trail that climbs from 4750  to 5620 feet. It starts out easy then becomes moderate to difficult and the last bit of it is strenuous. The other trail is the 2.5 mile Foothill Loop trail that is rated moderate to difficult. There is also a little Hummingbird Garden walk that is located at the Center. As always when doing desert hikes, take plenty of water, sunscreen and a hat. Keep on the trails and watch for snakes during the warmer times of the year. Keep an eye out for wildlife. There are 63 different birds that have been sited at the park along with mammals, such as mountain lions, coyote, fox, coatimundi, rabbits, skunks raccoon and deer. There are also many insects and reptiles that can be seen in the area.

When choosing Kartchner Caverns lodging, think of Down By The River B&B. It is about 30 minutes from Kartchner but you can cut 10 to 15 minutes off the time with a desert short cut. Ask us about it. The hours of operation for the park are as follows: When you are lodging at Down By The River B and B, schedule your tour after 10:30 so that you won’t be rushed at breakfast.

This entry was posted 10 years ago on Friday, April 26th, 2013. and is filed under Events and Things To Do, Nature.