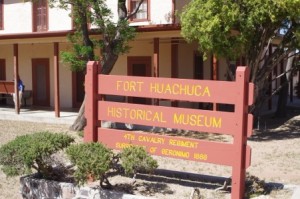 Museum Sign stands at the Fort Huachuca Museum and Commemorates Geronimos capture in 1888.

The Fort Huachuca Historical Museum was established in 1960 but the Fort itself has a long history of over 135 years in Southeastern Arizona. It tells the story of the Army in the West from 1846 to the present day, with emphasis on SE Arizona. The old portion of the Fort is on the National List of Historic Places and many of the buildings around the museum date back to the late 1800s and early 1900s. The visit to the museum is free but there is a request that you donate $2 in funds to help keep the exhibits and building maintained. The museum covers all aspects of the fort. The original museum shows the history of the fort in the early days up until World War II. The Annex museum is the US Army Intelligence Museum. In addition to the museums there is a self guided walking tour of the old Fort that you can take to see the different buildings. 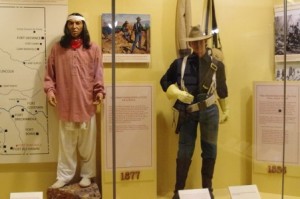 Cavalry Officer and Apache Display at the Fort Huachuca Museum

The US 6th Cavalry Column from Tucson, lead by Captain Samuel Whitside, made camp on the northern end of the Huachuca Mountains in March1877. The camp was only temporary to begin with but after assessing the site and the strategic location, a proposal was made to the Army headquarters in Washington to make the site a permanent post. The camp was a perfect spot to block the Chiricahua Apache escape route into Mexico. The location provided a view of the entire San Pedro Valley, over to Mt. Graham, The Dragoon Mountains, The Chiricahua Mountains and the Mule Mountains around Bisbee. General of the Army William T. Sherman personally visited the camp in 1882 and recommended to the Secretary of War that the camp should become a permanent post. 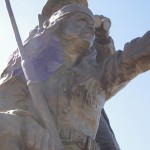 The Apache Indian Scout Statue is on the grounds in from of the Museum Annex at Fort Huachuca.

During the Apache War, the Army recruited some Apaches to be scouts for the Army. These scouts would guide the troops in pursuit of the Apache that were waging war. Fort Huachuca was instrumental in winning the war with the Apache and the final capture of Geronimo. There was proximity to the water from creeks that feed the San Pedro River, timber from the Huachuca Mountains for building material and close support for Fort Bowie. After the Apache war was concluded many of the posts in Arizona were shut down and abandoned but Fort Huachuca survived all the cuts. 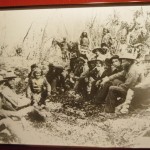 This Geronimo Picture is on display at the Fort Huachuca Museum

The Fort was home for the men of the 9th and 10th Cavalry, the famed Buffalo Soldiers. The regiments were authorized by Congress in 1866 and were manned by former slaves, black free men and black troops that fought in the Civil War. They originally were led by white officers. The Buffalo Soldiers were assigned throughout the west and served courageously in the Indian wars, Spanish American War, with General Black Jack Pershing in foray into Mexico and in the Philippines. In Fort Bayard, NM, near Silver City, there is a statue of Corporal Greaves, who won the Congressional Medal of Honor in 1879 fighting the Chiricahua Apache. The name Buffalo Soldier is purportedly given by the Cheyenne to the troops because their hair was wooly like the buffalo. 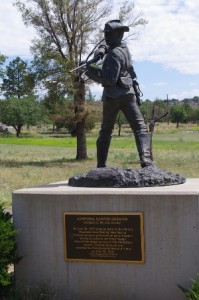 The Statue of Corporal Greaves can be found in Bayard NM. This Buffalo Soldier was awarded the Congressional Medal of Honor. 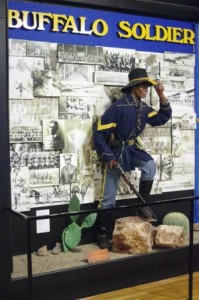 The exhibits are laid out very well and give you the history of the troops that manned the fort. There is a lot of information to read including quotes from people that have served at the fort. You will find timelines and old photographs of the fort and people that were there. I didn’t know it until I was looking at the exhibit of the baseball player that some of the stars from the Negro Leagues came from the Fort Huachuca Team. Angie and I have met some of the men who do reenactments that are featured at the various functions around Cochise County. We have had some long talks with one man, Willie, and he has told us many stories of the Buffalo Soldiers and their lives. If you have a chance to talk with Willie you will learn from a very well versed person on the historical events surrounding the Buffalo Soldiers. 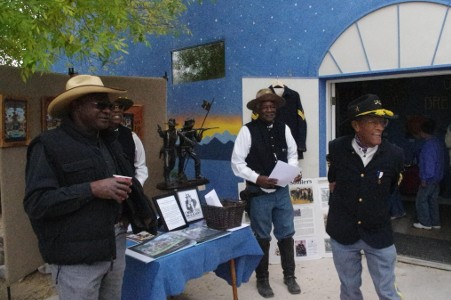 The Buffalo Soldier Reenacters come to many fuctions in Cochise County. Willie, the man on the right, is very knowledgeable about the history of the Buffalo Soldiers. We enjoy talking with all of these guys.

The museum is open Monday to Saturday 9 to 4. It is closed on Sundays and Federal Holidays. To gain entry to the Fort you must be an American Citizen and show your driver’s license prior to driving onto the fort. The MP at the main gate will give you a map to show you where to go to find the museum. A small map can be opened if you click here. The Fort is only about 45 minutes from Down By The River B and B, the San Pedro River B & B. After seeing the museums there are also some good birding areas that are inside the fort in Huachuca and Garden Canyons. The Elegant Trogan can be found in this area and some of the local birders know exactly where. So come and spend some time at The Lodging Hub of Cochise County and go on a tour of the Fort Huachuca Museum.

This entry was posted 9 years ago on Thursday, May 2nd, 2013. and is filed under Events and Things To Do.