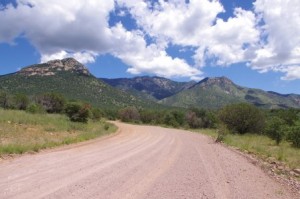 The road to Parker Canyon Lake from Coronado National Memorial is an unpaved road.

Parker Canyon Lake is just 15 miles west of the Overlook at Coronado National Memorial or a little over 70 miles from Down By The River B and B. The distance is not very far in freeway terms. When you go “boondocking” down the Arizona back roads, it will take you more time but can be quite an adventure. While growing up my dad used to take us out into the desert on unpaved back roads to explore what was out there. He called it “boondocking” and he would have agreed that the road to Parker Canyon Lake was right up there with his type of trip. Our guests have told us that they think Down By The River is off the beaten path but if they were to travel on Forest Road 61 from Coronado National Memorial they would know what off the beaten track really is. 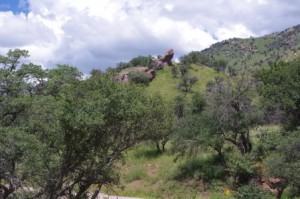 There was a location on the road to Parker Canyon Lake that appeared to be a turtle head and neck outstretched. Quite appropriate for the desert..

After our trip to Coronado National Memorial, Angie and I had a choice to make about our return back to the b and b. We decided to head for Parker Canyon Lake and then back via Arizona 83, through Elgin and the Sonoita Wine Country. You can read about our visit on Coronado National Memorial from our last blog. We started down the west side of the pass and headed toward the Canelo Hills and the San Rafael Valley. This valley is home to the Vega Ranch which was a Spanish Land Grant. The ranch is southeast of Patagonia and Barb and I had been there one time before. The Santa Cruz River headwaters start in the San Rafael Valley and meanders south into Mexico before returning back north into the US and through Tucson. 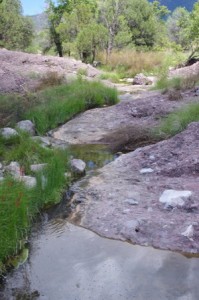 During the monsoon times there are many streams and creeks that flow out of the Huachuca Mountains.

The road we traveled was dirt but well maintained. There were notices on the road to watch for flooding as we drove along. During monsoon season it is always a good idea to watch where you travel and not cross fast flowing water at washes. As we traveled along we were skirting the southern and western side of the Huachuca Mountains. This is cattle country and you will find many cattle guards on the road. We crossed side canyons and at times came to rough sections of the road but not bad enough to cause problems. We took our time and enjoyed the scenery. We stopped at different times to check out the views and things of interest. One interesting stop was a rock jutting out of the side of the mountain. I though it looked a little like a tortoise head and neck stretching out from the shell.

As we traveled we had to navigate over streams that crossed the road. One stream was at the junction of forest road 488. We decide to stop because of the amount of water running under the bridge. There were pools that were waist deep. As we walked on up the river we notice a lot of red flowers along the stream. These brilliant red flowers turned out to be Cardinal Flowers. After our short break we started off again. To our surprise, we could see a ranch from the top of the hill as we dropped into the canyon. The ranch was nestled on one side of a creek that flowed out of the Huachuca Mountains. The ranch was definitely off the beaten track and they need to travel about 40 miles to find the nearest grocery store. At the bottom of the canyon, we finally did come to one stream that gave us pause. The stream was flowing when we reached it. The water didn’t appear deep but there were some larger rocks that had washed down onto the roadway. We took our time maneuvering around the rocks and had no problems with the stream.  It wasn’t too long before we were stopping at Arizona 83.  83 runs from Parker Canyon Lake through Sonoita and over the Santa Rita Mountains to Interstate 10 near Vail. We found that the 15 mile trip didn’t require us to have a high ground clearance or a 4 wheel drive vehicle. However we also drove during the dry part of the day. It took us about an hour and a half to do the 15 miles but we also did stop and walked around photograph what we found on the road. 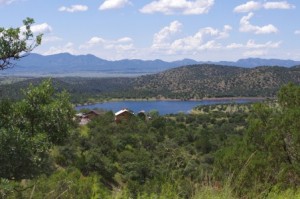 Parker Canyon Lake overview with the San Raphael Valley in the distance.

Parker Canyon Lake is a man-made lake about 5 miles north of the Mexican Border. It is at about 5400 feet elevation and covers about 130 acres. The lake is stocked with Rainbow Trout, bass and catfish. Boat rentals are available and there are boat ramps for those that want to bring a boat.  Fishing requires a license but that can be purchased at the concession shop. The Oak forest is great for birders. We watched the Barn Swallows as the maneuvered into their nests at the concession store. Bald Eagles and Osprey are also found in the area.

After we finished our wandering around the lake, we had something to quench our thirst and headed back to Down By The River B and B. The 160 mile loop trip took us about 6 hours from when we left until we got home but with all the stops and photographs we took it was a very pleasant day.  If we had gone to Bisbee it would have been about 40 miles shorter but it would not have been as adventurous. “Boondocking” is some much more fun. 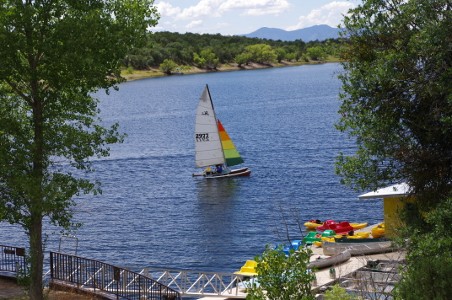 Boating is allowed on Parker Canyon Lake and people were taking advantage to the great conditions for sailing.

This entry was posted 9 years ago on Saturday, September 14th, 2013. and is filed under Events and Things To Do, Nature, Outdoor Recreation. 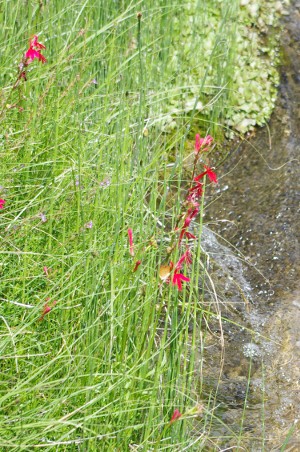 Cardinal flowers bloom along the stream beds that we found on the road to Parker Canyon Lake. 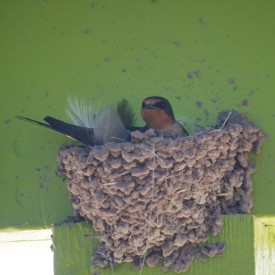