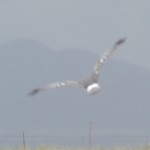 Keep your camera ready so that you can take photos from a car during travel.

B&B San Pedro River birding photography requires good equipment, some skill and it also helps to have some luck if you want to have those close up pictures. I was a Boy Scout in my youth and one of the things you learned was the Scout motto. “Be Prepared”. The motto has proven true for me when I am taking photos around our San Pedro River B&B. The days I forget to take my camera with me are the days that I could have had a great photo.

But then there are days that something great happens and I get a B&B San Pedro River birding photo that is a keeper. In a blog I wrote a while ago I related the story about seeing a Northern Harrier gliding over the back of the property. This was usually when we were preparing breakfast for the guests and I never had the camera with me. Happily it ended one day when Angie told me a Northern Cardinal was in a mesquite tree behind the fence at the patio. I put my zoom lens on the camera and went out to get the picture of the cardinal. After the photos were taken, I saw the harrier gliding over the field again. The camera was ready and so was I. You do need that little bit of luck. 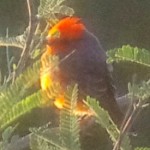 Sometimes you need to shoot a picture through a window. The shot isn’t going to be perfect but it can be made.

If I am going anywhere other than to the store, I make sure my camera goes with me. We went wine tasting in September with my son and his family. On the way to the winery we decided to show the grandkids Twin Lakes in Willcox. The area is known for waterfowl and as we were driving along a white bird came down and glided in front of the car for a while. I had the camera and as we were driving I was shooting pictures of the bird. Luck showed its face again. Although the shots were a little shaky because of the ride, I was able to take some nice flight shots. From the shots we could determine that the bird was a Northern Harrier.

Just a few days ago, I saw a bird that hadn’t been in the patio area before. Again the camera was handy and I put my zoom lens on the camera. I carefully walked out the door and headed out onto the patio slowly. I didn’t want to scare the bird off. From the patio I could see that the sun wasn’t right for a good shot. I moved to the right and finally worked my way to the access opening in the fence and set up for a shot behind the poles. As I looked around with the camera the bird posed for me and I got a great shot of the Cassin’s King Bird. After a few minutes of posing, he left but there were gold finches on the feeder. Since there was a particularly nice goldfinch on the feeder, I decided to take a couple of shots. 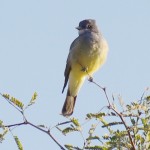 It is nice to have birds pose for you when you are trying to get a picture.

I was able to upload and process the digital film on the computer. While reviewing what I had photographed, I found that the photo of the Cassin’s King Bird included a Chipping Sparrow sitting on a nearby branch. I had concentrated on the king bird so much I hadn’t seen the sparrow. When I looked at the finch photo I found another surprise. The picture showed one bird leaving the feeder and another finch starting to hover as he was landing on the feeder. Now you know what the luck portion is in photography. Some things you can anticipate but others are happenstance. Pray that luck is smiling on you as you take B&B San Pedro River birding photos.

Bring your equipment and try your luck at photography at Down By The River, our San Pedro River B& B, The Lodging Hub of Cochise County. The property has many opportunities to photograph birds and other wildlife both on the property and down on the river. 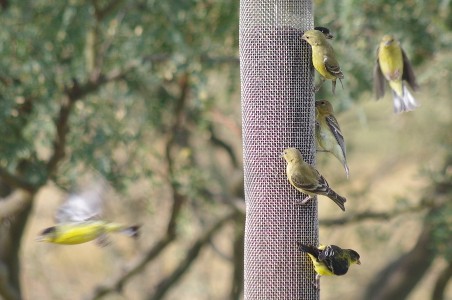 The Goldfinch were leaving the feeder and coming in as I shot the picture.

This entry was posted 9 years ago on Tuesday, October 29th, 2013. and is filed under Nature.