July brings the monsoons to Southeastern Arizona after the heat up in southwestern and central Arizona. The rains come in down pours and the desert turns green with new growth unlike the central and western part of the state. The temperatures moderate with the storms and it isn’t unusual to be able to sit outside and enjoy a meal or snack while watching the show with temperatures in the 8Os, at least 20 degrees cooler than Phoenix.

Southeastern Arizona is at a higher elevation, unlike Phoenix and the south central and western sides of the state. In particular, the normal low flow on the San Pedro River can turn into a raging torrent overnight with the down pours that happen. The river is the life blood for the many animals and birds in the area. 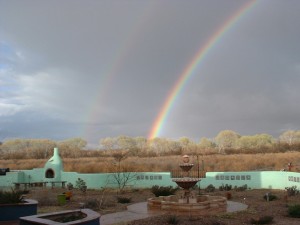 In addition to the rain, the beauty of lightening coming down during the storms is amazing. With the clouds and the lightening also come brilliant sunsets that range from pinks, oranges and reds to fantastic fuchsias and purples with grays and blacks intermixed. And with the clouds come rainbows and every once in a while a double rainbow. 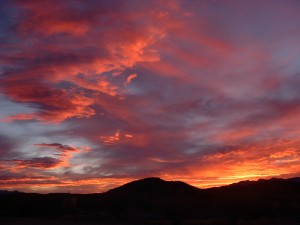 Now where is a good place to see one of these monsoon storms? Well May I suggest a romantic get away to Down By The River B and B with the unrestricted views to the east and the west is certainly a great place to start. You can sit on the patio under cover and be protected from the rain. Sit back relax enjoy some wine from the local wineries here in this part of the state while the show crackles on around the sky.

The monsoons started forming a little earlier this year. Down By The River B and B  has had 2 showers so far starting in late June and on the July 1 I saw the first bit of lightening flash to the south.  It should promise to be a very good year for the monsoon if the early start is any predictor.  Find out for yourself that nature has a way of putting on great shows that can’t be done in a nightclub. So come on down to Saint David in Cochise County to view the monsoon lightening and color display and enjoy it.