Hiking In The Chiricahua National Monument

Before I start talking about the trails, I would like to give you a little history of the Chiricahua National Monument. The Chiricahua National  Monument is located in the eastern part of Cochise County, Arizona near the New Mexico border, south of I-10. The Monument is relatively unknown to many people in the U.S. and even in many parts of New Mexico and Arizona. It encompasses almost 12,000 acres, much of which is designated as wilderness area. You can enjoy looking at the large variety of plants, reptiles, birds and mammals that the Monument has to offer. This part of Arizona went through a violent past that began about 27 million years ago when the Turkey Creek Volcano erupted and spewed ash up to 2000 feet deep over an area of 1200 square miles. The ash particles melted together to form rhyolite, a grayish colored rock that is what makes up the Monument today. Over the preceding years, the land was pushed up and the rhyolite cracked thus allowing water and ice to enter, breaking the rocks apart. Today the area is dotted with rock formations such as spires, balance rocks and other shapes. If you have an active imagination, the rocks will remind you of things such as Duck on the Rock, Punch and Judy, and The Sea Captain to name a few. The Monument reminds me of a mini Bryce Canyon although without the red rock of course.

In recent history, the Apache Indians inhabited these mountains from the early 1400s. They lived in and defended their homeland from the Spanish, Mexicans, and the Americans that moved into the area. In 1886, the last of The Chiricahua Apaches surrendered and were moved to reservations. In 1888, Swedish immigrants settled in the area and built Faraway Ranch. Later descendants and in-laws of the owners of the ranch (Ed Riggs and his wife) worked to build trails to view the rocks, and provided tours for visitors to the area to show off the canyons and rock formations. In 1924 President Calvin Coolidge, through the combined efforts of Ed Riggs, Governor Hunt, and a photographer by the name of Armstrong,  set aside the land that is now known as the Chiricahua National Monument. 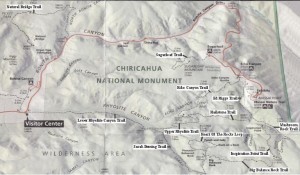 Map of the Chiricahua National Monument          click to enlarge the map

On your way into the Monument, make an effort to stop at the Visitors Center. The center offers a short film history of the park and has interesting displays of the canyon history and fauna. From the Visitors Center you can drive to the parking areas at Massai Point or Sugarloaf on 8 miles of paved road. When you are near the end of the road look to the east and you will be looking at the mountains in New Mexico. Both Massai and Sugarloaf parking lots are at an elevation of around 6850 feet above sea level; almost 1400 feet higher in elevation than the Visitors Center. Both sites have restrooms and picnic areas along with a trail that connects both parking areas. There is a short nature trail that is located at Massai Point which includes a building that explains how the area was formed and the features that can be seen from various  locations within the building. 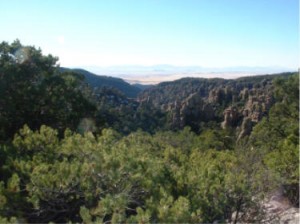 View of the canyon at Massai Point

To best see the rock formations however, you  must put on your hiking shoes and take the trail down into the canyon. Here is a hint for those of you that want to take it a little easier and see it all: Leave your car at the Visitor’s Center and catch a ride up to Massai Point. Doing this allows you to plan your route down the trail; enabling you to finish the hike back at the Visitors Center. The hike isn’t all down hill as it does include some inclines as well.

There are many ways to hike in the canyons that comprise the Monument but I will give you one that starts and stops at Massai Point. This hike is not very strenuous and is only about 4 miles long. It is a loop trail that starts at Massai Point. As you go down into the canyon you intersect with two trails. Take the one that goes over to the Echo Canyon Trail. Then take Echo Canyon, until you reach the Hailstone Trail that connects to the Ed Riggs Trail. Then the Ed Riggs Trail back to the sign post to Massai Point. 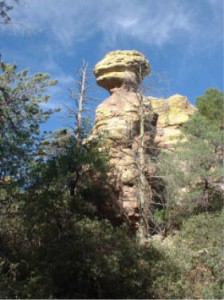 The rock formations along these trails are fantastic with a lot to view and explore, including one that I call the Gecko. From the Parking lot it is about ½ mile to the Echo Canyon Trail. The trail follows along Echo Canyon down toward Rhyolite Canyon and passes through the Echo Canyon Grotto. This area is a group of rocks that have holes carved through them by the elements. You can 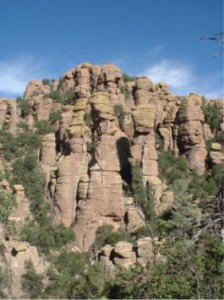 walk around and view the features and if you’re there at the right time, the light and shadows can be great for photography. The trail is 1.6 miles long and generally goes down hill over it’s entire length. Most of the hike gives you views of rock formations to your front and sides but don’t forget to turn around and look back. You’ll be surprised at the views you’re leaving behind. 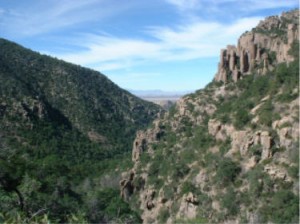 View along the Echo Canyon Trail with a view down the Rhyolite Canyon and the Sulphur Valley beyond.

Looking down the canyon, you will glimpse the path of the Lower Rhyolite Trail coming from the Visitors Center, along with a view of Sulphur Springs Valley and the Dragoon Mountains immediately beyond.  The second trail, leading back up the canyon, is the Hailstone Trail. This trail is .9 miles long and relatively flat. It takes you along the rock formations on both sides of Hunt Canyon. This is the main part of the canyon that you view from Massai Point. 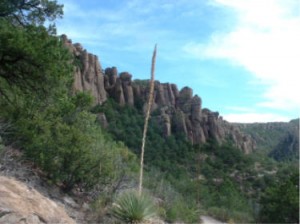 View of the rocks along the Hailstone Trail.

Hailstone Trail ends where it splits into two trails. On the right is the Mushroom Rock Trail that takes you up Hunt Canyon where it intersects with trails leading to Inspiration Point and The Heart Of The Rocks Loop. The second trail to the left is the Ed Riggs Trail that takes you back up to the Massai Point parking lot.

The Ed Riggs is .7 miles long and has a variety of plants to view along the way. As the Ed Riggs Trail  leaves Hunt Canyon with all the wonderful rocks, it follows a creek bed up another small canyon. Large Douglas Fir and Ponderosa Pine, along with other plants, find a home along this part of the trail. 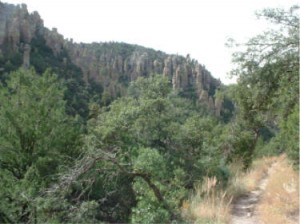 The Monument has approximately 1200 species of plants within its borders, some of which are unique to the park.

This hike can take you only one hour to do, but if that’s the case,  you’re not stopping to smell the roses and you are missing all the natural beauty. I suggest you take along lunch or a snack, and find a spot along the trail to sit down and enjoy the view. Oh, don’t forget to take your camera, batteries, and film if you need it.

When you decide to make the trip to the Chiricahua National Monument, consider Down By The River Bed and Breakfast located in St. David, Arizona as the place to stay. It is about a one and a half hour drive from the B and B to the Monument and  we are centrally located for additional day trips throughout Cochise County. Visit our website blogs for other interesting things to do in Southeastern Arizona.

This entry was posted 12 years ago on Monday, November 8th, 2010. and is filed under Nature, Outdoor Recreation.