Hiking is great exercise and hiking in the Dragoon Mountains of Southeastern Arizona, where Cochise lived, is a great thing to experience. The beauty of the rugged mountains in this area east of Saint David, AZ is spectacular and there is a lot of history to be learned about the area. One hike is to the Council Rocks which is located in the San Pedro River Valley on the west side of the Dragoon Mountains. Your drive takes you to the west side of the Dragoons along a forest road that is rough in places but still can be handled by a normal car. Council Rocks has a natural amphitheater at the base of the 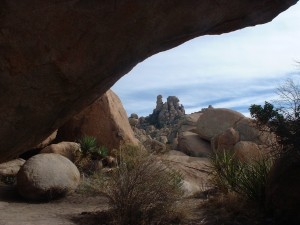 mountains which echoes the history of Cochise County. The Dragoon Mountains is the location of Cochise’s Stronghold, one of the many places where the famed Chiricahua Apache Chief held out against the US Calvary for many years. There is a belief by some people that General Howard and Cochise met at this location to make a peace treaty. Others point out that the description of the meeting site, as described in General Howard’s accounts, doesn’t match the Council Rocks site.

The Apaches were not the first Native Americans to live in the area. About 1000 years ago, the Mogollon Indians inhabited the area and left behind pictographs. These are painted symbols unlike petroglyphs which are carved or hammered into the stone and are much more delicate. There are some 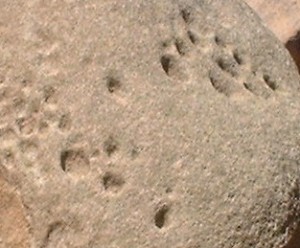 scholars who believe that the Apache added to some of these pictographs after they inhabited the area. The Native Americans also made mortar depressions in nearby rocks for grinding seeds and nuts that can be found in the area. Many of these indentations in the rocks are deep and easily identified. There are also notches in the rock faces that appear to be steps which allowed the Native Americans access to better views of the area.

The pictographs are located under large rock overhangs that are accessed from two different trails, each about a quarter mile from the parking lot. The trail to the right goes over to a rock crevice that goes up to the rocks above or you can continue on the flat and go to the amphitheater. 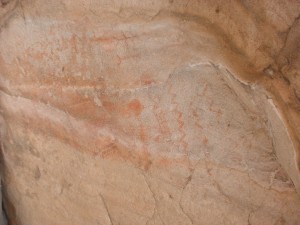 Pictograph left by the Mogollon People

After viewing the rocks, you can take some of the paths that lead away from the pictographs. My favorite time for hiking in the area is when the wild flowers are in bloom. One of the meandering trails leads you to a point that 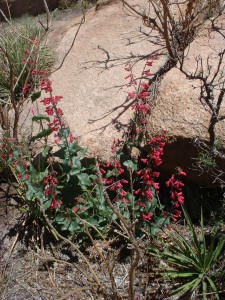 Wild Flowers Growning Near Council Rocks In The Dragoon Mountains

looks down onto the Council Rocks amphitheater. This allows for a view of the San Pedro River Valley and the Whetstone Mountains across the Valley, home of Kartchner Caverns State Park. Looking further south, you can see the Huachuca Mountains. Also along the trails that run along the edge of the cliff, you will find more mortar depressions that have been worn into the rock where grinding was done. If you are there after it has rained, these grinding mortars are evident because of trapped water.

The area is very rugged looking and has places where the rock formations are just amazing with boulders stacked on boulders. Hiking back into the canyon, you’ll find yourself on a trail that leads away from Council Rocks. This canyon is quite beautiful because of the various rock formations and flowing water which is dependent upon the time of year. This trail leads back into the canyon and takes you to an area where there is a grove of trees that offer shelter. I can imagine Cochise setting up a camp at this location because of its 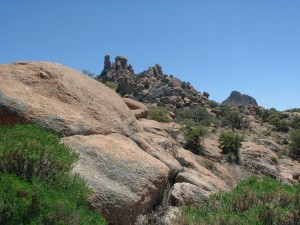 Scenery While Hiking Around Council Rocks In The Dragoon Mountains

natural protection, supplies of water and game, and for the escape routes out of the area. As you travel further back into the canyon, you begin to climb and reach areas that make the hike more difficult. I believe that you would be able to reach the top of the pass and cross over to the other side. However, that would have taken more time than I was allowed.

If you would like specific directions and a warm, inviting place to stay during your visit to this beautiful area, visit the Down By The River Bed and Breakfast website to book your room and get the additional information you need for other hikes in the this area of Southeastern Arizona.

This entry was posted 12 years ago on Friday, October 22nd, 2010. and is filed under Outdoor Recreation.

One Response to “Hiking trail to Council Rocks in Southeastern Arizona” Comments are currently closed.