As you drive on Interstate 10 through the Little Dragoon Mountains about 15 miles east of Benson you will find an area that is in stark contrast to the San Pedro River Valley. Texas Canyon is a massive granite formation that has weathered over the eons to create a jumble of rocks that catch the eye. The granite formation can be seen as you drive past on the interstate or when you stop at the rest areas. The rest area gives you some nice views of the rock pillars and boulders but you are fenced in and you can’t really get out to explore the area. If you take exit 318 you will be able to find some spots to wander around and see a little of what is here.

When Barb and I were first coming to southeastern Arizona looking for a location to build Down By The River B and B, we drove through Texas Canyon. We would often think how fantastic the rock structures were in this area. We wished that we could have moved some of this area to Saint David and placed it along the San Pedro River right next to the BnB but alas it was 25 miles away.  The rocks are scattered over a large area and it almost looks like some giant was playing with them and then just left after he was done. 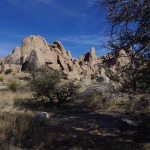 During the eight years the b and b has been opened, we have traveled past or through Texas Canyon on our way to somewhere else. Usually we have taken the turn off to go to the Amerind Foundation Museum, The Triangle T Ranch for dinner in the saloon, or just to take a shortcut to Arizona 191 on our way to various places in the Sulphur Springs Valley. We never took the time to stop and see what the back country was like.

Recently, Angie and I decided to take a short day trip from Down By The River B and B to Sunsites and head  to the trail head for a hike up to Cochise’s Stronghold in the Dragoon Mountains. Naturally I was going through Texas Canyon as we exited the freeway on Dragoon Mountain Rd. But instead of making the turn and driving on to our destination, I decided to take some time to see what I had been missing. I turned left under the freeway and took 4Y Ranch Road into the back country north of the freeway. The one lane road doesn’t go far, maybe a mile, and you finally reach  the cattle guard and the ranch gate. 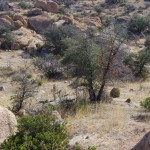 We backtracked a little and found a place to get off the road. With a nice morning sun, we decided to walk around and see what the area had to offer. It turned out that long with the enticing rock formations, the area has yucca, ocotillo, cactus of various sorts and scattered trees that dot the terrain. We also saw signs of coyote, deer and the occasional bird that fled our advance. On previous travels though the area I have various seen birds fly across the road and I have spotted hawks that are watching for prey. But since this is winter, I didn’t expect to see a lot of activity.

As we walked around the area we notice the rocks were crossed by thinner lines of a different type of lighter colored material. At first I thought that since this area was a shallow sea way back in prehistoric times that these strata I was seeing in the rock were probably layered like sandstone and then hardened. My originalthesis turned out to be wrong. After investigating, we later learned that this entire area was formed about 50 million years ago when magma pooled below the surface of the earth and 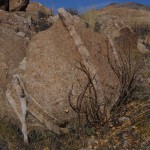 There are rounded rocks in Texas Canyon that are layered with strata.

slowly cooled forming the rocks geologists call quarts monzonite. The strips of fine grain material is actually called Aplite and it is formed during the granite formation process. Unlike the Chiricahua Mountains the area never became an explosive volcano since the magma never reached the surface of the earth. Over the years the earths surface eroded away and left the rocks. Weathering from wind and the freeze thaw cycle started breaking the rocks down and rounding the corners giving the rocks spheroid shapes. As the softer rock was worn away the denser rock would sometime be sitting on the small support underneath and you get the proverbial “Balanced Rock”.

After the geology lesson, come on forward to the more modern times and I will tell you more about who inhabited Texas Canyon. The area has been found to to contain petroglyphs and pictographs on the boulders and was the area was sacred to the Native American inhabitants. I can see why that was because it is awe inspiring when you are amongst the boulders. Cochise is said to have used this area for his winter camps. In 1858, the Butterfield Stage Route ran through Texas Canyon on its way to Benson after leaving Apache Springs near Fort Bowie in the Chiricahua Mountains. The stagecoach line was awarded the mail contract from the US Government and carried mail and passengers from Saint Louis, MO to San Francisco. The stageline lasted until the start of the Civil War when the troops were withdrawn to fight in the war. With no military protection from the Apaches, the stage route was abandon. The area was controlled by Cochise and his Chiricahua Apaches until he made peace with the US in the 1870s. In the late 1880s David Adams settled in the area. He was from Coleman County Texas and he was followed by his brother William in 1895. Over the years

other family members followed the brothers and settled in the area. It became known as Texas Canyon because of all the Texans that lived up there. The Adams family cemetery is located on the Amerind Foundation grounds along the road that leads into the museum parking lot.

There are a couple of places in Texas Canyon that need to be mentioned. In 1927, the Triangle T Ranch got its name from the new owner Metta Tutt. The ranch became a dude ranch and later was used to house the Japanese Diplomats during World War II.  Parts of the ranch have been used as movie sets including the original 3:10 to Yuma with Glenn Ford and Tombstone. The television production Young Guns also used the property as a set. Other pictures have been made in the area and notable people have visited the place. Just a little further south is the location of the Amerind Foundation. In the 1930s William Shirley Fulton established The Amerind Foundation in the canyon where he was doing archeological digs. The Museum features much of what was found in the area along with artifacts from Mexico and South American cultures. The Foundation is celebrating it’s 75th Anniversary.

This gives you some of the highlights of the area and it is a short 30 minute trip from the Down By The River, The Lodging Hub of Cochise County. I will be doing some more blogging on the Amerind Museum and what you can see when you visit. We have seen birds in the area but probably one of the strangest things I have seen at the Amerind was the vultures that were flying up into the tall trees to roost toward the end of the day. Naturally I didn’t have my camera with me for that shot. I still need to jog my memory to bring a camera when I am going places. It never happens to fail – there is always a great shot when I don’t have the camera. You think I would learn.

This entry was posted 10 years ago on Monday, January 28th, 2013. and is filed under Events and Things To Do, Nature, Outdoor Recreation.