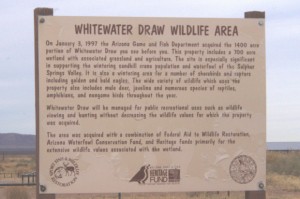 White Water Draw is a birder’s paradise during the late fall, winter and early spring. This place is located in Cochise County about an hour south and east of Down By The River B and B. The 1400 acre site has been owned by Arizona Game and Fish Department since 1997 when it was purchased from the Hyannis Cattle Company. About 700 acres is wetland and is known as a wintering area for Sand Hill Cranes and Snow Geese. After talking with guests Barb and I had gone to the area during the early spring after we had first opened the B & B 8 years ago.  Angie had never been there, so at the beginning of February we had a chance to sneak away for a couple of hours before our next guests were to arrive at the B & B for check in. We really were looking forward to this and I wanted to have the chance to get some good pictures of the action there. 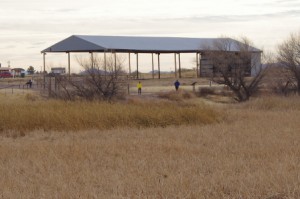 The Barn At White Water Draw Is Home To Owls

The cards seemed to be stacked against me as I gathered things together prior to making the trip. We didn’t have a great sunny day like we hoped to have, and the temperature that morning was cooler as we headed off. My one zoom lens that I always use for occasions like this had recently become disabled and wouldn’t focus so I had to improvise. I had some magnifiers that I could put onto the shorter camera lens and I hoped that doing this would work. I anticipated that I would not be as satisfied with the results between the overcast skies and the lack of my reliable zoom lens. But que sera sera as Doris Day once sang. Just gotta deal with the cards you’re dealt. Little did I know that the deck would be stacked against me in other ways I hadn’t thought of. 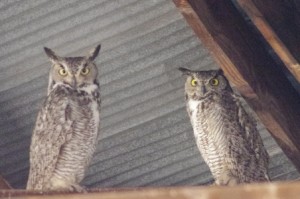 Great Horned Owls Can Be Found In The Barn At White Water Draw.

The drive to White Water Draw is about 50 miles and takes under an hour. We headed to Tombstone and drove through town. After a few miles Davis road was on our left and we took it to just after milepost 21. We turned right on to a dirt road named Coffman Road. The road sign wasn’t there but there is a sign for White Water Draw on the road. After about 2 miles we came to the parking area. It was still overcast and cold; so we bundled up and walked over to the barn that sits on the site. “The Barn” is about 30 foot tall and there usually are Barn Owls and Great Horned Owls roosting in it. One owl was there instead of the customary pair. After taking some pictures and saying “How Do” we walked on over to the viewing area to check out what was going on with the cranes and other denizens of the wetlands. 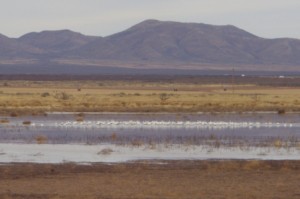 Snow Geese On The Water

Besides the Sand Hill Cranes and Snow Geese, the area is frequented by many other birds and water fowl. These include Blue-Winged, Green-Winged and Cinnamon Teals, Northern Shovelers, Western and Clark’s Grebes, Mallards, Egrets, Great Blue Heron and many others. The area has many raptors including Northern Harriers and Swainson Hawks. During my previous visits I have spotted Phoebes, different types of Sparrows, Yellow Headed and Redwing Blackbirds, and Vermillion Flycatchers to name a few. It is a good place to see a large concentration of different birds in a small area. 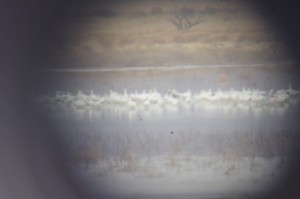 Snow Geese As Seen Through The Magnifiers

As we walked along the levee, we came to one of the viewing platforms constructed at the water’s edge. The platform has free for use, large magnifying glasses that you can use to look at the birds. While at the viewing platform, we saw a Loggerhead Shrike right below us. He was camera shy. Every time I tried to get the shot, he would hear the camera focus quickly duck into the reeds and become almost invisible.  I noticed the Snow Geese and shot some pictures of them grouped on the water. After my shot, I looked through the glasses that were provided to see them better. It was much better than my lens. Then I thought that maybe I could get a shot through the magnifier to get an idea of a comparison of my lens to the viewer. It wasn’t a real sharp picture because I was attempting to focus through another optical instrument. I was semi successful and you can see in comparing the two pictures it does give you an idea of what the magnifiers can do. 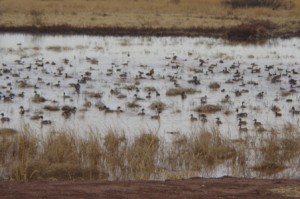 Ducks And Other Water Foul Fill One Of The Ponds

We moved further along the levee and came to the next pond that contained a lot of ducks. We startled them when we walked up to the edge and they saw us. They all took flight and landed a little further away. It would have been a great shot had I known that the ducks were there and been ready for them. But by the time I got the camera on the birds they had gotten settled a little further from shore. There was a multitude of water fowl in the group. It was fun to watch them feed, with tails up in some cases, and others like the Shovelers just put their heads down with the long beaks to root around in the mud. 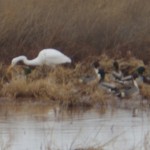 A little further along, I took some time to check out an Egret that was feeding in the reeds. They exhibit a lot of stealth and wait for the fish to come to them. With a quick move he had a fish but I was so mesmerized by watching what he was doing that I forgot to click the camera and I missed the shot. Not the first time that I have missed pictures because I’m concentrating on what I am viewing. I have to get over that since I can see the action later if I take the picture when I should.

Over the fields to the west we saw some Northern Harriers gliding over the grasslands.  It is a beautiful sight to see these birds gliding through the air. It reminded me of the time last summer when I saw the Harrier that frequented our San Pedro River B & B and how I finally got a series of pictures of the Harrier in flight. But as I watched, the 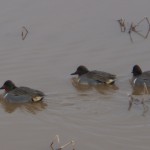 Harrier changed paths and flew toward the Snow Geese. In an instant they were up in the air and scattering out of the way. Again, camera down and batteries off so I didn’t get a shot again. You think I would learn this lesson but in the long run it was probably best that I didn’t walk around with the camera always on. While the geese were flying in a circuit, I tried to focus on them as they flew toward us and the automatic focus just wasn’t cooperating. I did get some nice pictures of the gray sky. By the time I had them in focus again they were landing back in the water where they had started.

About this time my battery started telling me that it was getting depleted. Ok, not to worry I always have the spare in the camera case, so I stopped to change to the recharged battery. I put it in and found that it had less of a charge than the one that I had just had in the camera. “DOH!” as Homer Simpson would say.  I forgot to charge it after our walk around Texas Canyon and then our hike to Cochise Stronghold. 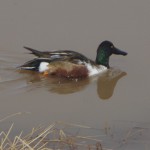 Northern Shoveler Can Be Found Here At White Water Draw.

Now I am in a bind. One battery with one anode in the grave and the other already 6’ under raising daisies! OK, I ask myself, what takes most of the energy to run the camera? Number one is the autofocus. So I put things on manual focus but this really is not the best for what I want to do with the pictures. The manual focus depends more on your eyesight determining what is in focus and what isn’t. Not bad if it is bright out or if you don’t intend to enlarge the picture later. Both conditions will make it more likely for a picture to be blurred. Mas que sera para mi! I don’t have a lot of choices if I want to have pictures.

So what happened? Well, you will have to wait to read about this misadventure in Part 2 of this blog where I will be talking about watching the Sand Hill Cranes come in from feeding in the fields. Consider staying at a Southeastern Arizona B and B with easy access to a lot of Birding in Cochise County. The San Pedro River B&B is located at the northern end of the San Pedro River National Riparian Conservation Area between Benson and Tombstone.

This entry was posted 10 years ago on Monday, February 4th, 2013. and is filed under Events and Things To Do, Nature, Outdoor Recreation.