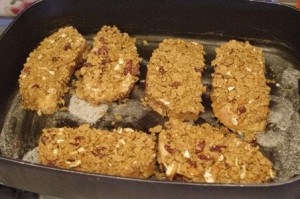 Berry Nut French Toast cooks up golden brown before you place it in the oven.

At Down By The River, our B&B Berry Nut French Toast recipe is a real hit with our guests. It isn’t your normal French Toast since we have added a little twist to the recipe. We serve this as a side dish to one of our main entrees such as the egg cup or one of our quiches. When we serve this we also include a berry syrup such as Boysenberry or blueberry. This syrup really sets it off. The longer you let your bread soak the better it is for holding the cereal on the French Toast. We actually will use a spoon to dip on the cereal and press it into the bread. This recipe make four serving. Adjust the quantities as needed for other serving amounts.

Down By The River B and B Logo

Being the Lodging Hub of Cochise County where guest can stay and take short day trips, we want to make sure that the Guests at our San Pedro River BnB praise the breakfasts that we serve. We don’t want our guests to have the normal eggs and bacon dishes that are served up in a chain restaurant. That is why we go out of our way to make sure that you have a morning breakfast you will not forget. Many guest ask for the recipes and we freely give them out. But before we serve a new recipe to our guests, we try them ourselves to make sure that they meet the standard that we have established. Sometimes we have to tweak the recipe just to make it better.

This entry was posted 9 years ago on Saturday, May 11th, 2013. and is filed under Recipes. 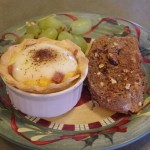