After Angie and I had visited the Paton Hummingbird Haven and had lunch we decided against returning to Down By The River B and B directly on Arizona Highway 82 but to rather take a back road that leads into the San Rafael Valley. This drive will take you close to some Southeast Arizona ghost towns. The San Rafael Valley is south of Patagonia and is accessible by Harshaw Road on the east end of town. The road is paved up to the turnoff to the old ghost town of Harshaw. We traveled about 2 miles on the gravel road to the right passing cattle and driving through a beautiful sycamore and oak forest. We finally came to a sign that pointed left to Harshaw. 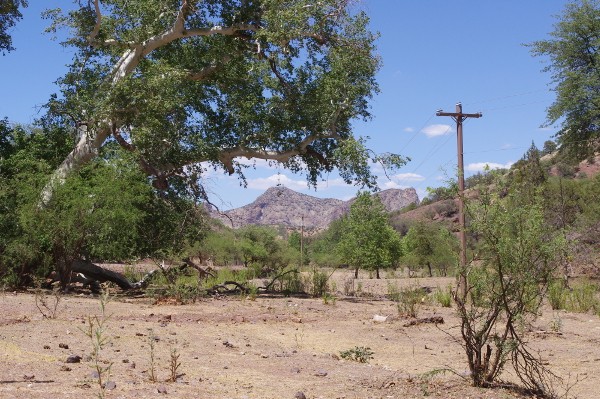 The town was the original site of a cattle ranch owned by David Harshaw. Hawshaw returned to cattle ranching after leaving the army in the 1870s. He settled south of Patagonia after being run off by Tom Jeffords for illegally grazing his cattle on Apache lands. While raising cattle in this area he found silver ore. He made a mining claim and named the mine Hermosa. The town was founded prior to the ore deposits that were found 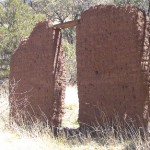 Southeast Arizona ghost town ruins can be found in Harshaw.

in Tombstone in the late 1870s. The silver deposits started to fade by 1881 and the town burned in 1882. Harshaw’s main street stretched for a mile and had a newspaper, Post Office, saloons, boarding house and many other businesses. There is a gravesite at the town also. Over the years the mine restarted and stopped numerous times until by the 1960s everything was abandoned and it reverted to just another one of the Southeast Arizona ghost towns. The town site is now part of the Coronado National Forest. There are ruins to see and explore but we only made a cursory look of the town site.

If you continue down that Forest Road 49 you will encounter other Southeast Arizona ghost towns. These are old towns that grew up around mines and include Mowry, Washington Camp, Duquesne, and finally Lochiel which is located on the border of Mexico. Mowry is the oldest with the mine dating back into the 1850s. The other towns were mining in the late 1800s. We looked at the time and decided that we wouldn’t be able to make that trip since we started too late to be able to explore the area like we wanted. There are cautionary signs on the road in this area and you don’t want to be here after dark because of the illegal aliens and the drug smuggling that happens in the area at night. Instead of exploring more Southeast Arizona ghost towns we decided instead to head back and continue into the San Rafael Valley. 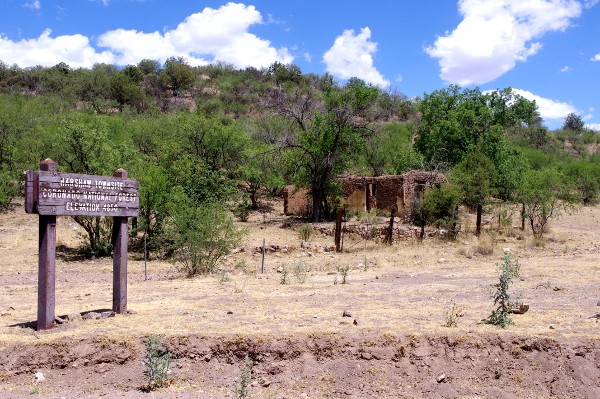 Harshaw town site has ruins for exploring at this Southeast Arizona ghost town.

This entry was posted 8 years ago on Saturday, July 19th, 2014. and is filed under Down By The River FAQ, Events and Things To Do, Outdoor Recreation.